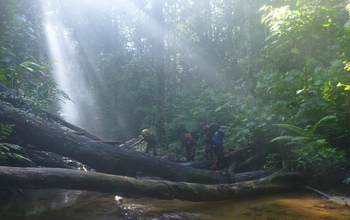 PAWS suggests patrol routes in Malaysia based on behavioral models.

A century ago, more than 60,000 tigers roamed the wild. Today, the worldwide estimate has dwindled to around 3,200.

Poaching is one of the main drivers of this precipitous drop. Whether killed for skins, medicine or trophy hunting, humans have pushed tigers to near-extinction. The same applies to other large animal species like elephants and rhinoceros that play unique and crucial roles in the ecosystems where they live.

Human patrols serve as the most direct form of protection of endangered animals, especially in large national parks. However, protection agencies have limited resources for patrols.

With support from the National Science Foundation (NSF) and the Army Research Office, researchers are using artificial intelligence (AI) and game theory to solve poaching, illegal logging and other problems worldwide, in collaboration with researchers and conservationists in the U.S., Singapore, Netherlands and Malaysia.

"In most parks, ranger patrols are poorly planned, reactive rather than pro-active, and habitual," according to Fei Fang, a Ph.D. candidate in the computer science department at the University of Southern California (USC).

Fang is part of an NSF-funded team at USC led by Milind Tambe, professor of computer science and industrial and systems engineering and director of the Teamcore Research Group on Agents and Multiagent Systems. Their research builds on the idea of "green security games" -- the application of game theory to wildlife protection.

Game theory uses mathematical and computer models of conflict and cooperation between rational decision-makers to predict the behavior of adversaries and plan optimal approaches for containment. The Coast Guard and Transportation Security Administration have used similar methods developed by Tambe and others to protect airports and waterways.

"This research is a step in demonstrating that AI can have a really significant positive impact on society and allow us to assist humanity in solving some of the major challenges we face," Tambe said.

PAWS puts the claws in anti-poaching

The team presented papers describing how they use their methods to improve the success of human patrols around the world at the AAAI Conference on Artificial Intelligence in February.

The researchers first created an AI-driven application called PAWS (Protection Assistant for Wildlife Security) in 2013 and tested the application in Uganda and Malaysia in 2014. Pilot implementations of PAWS revealed some limitations, but also led to significant improvements.

PAWS uses data on past patrols and evidence of poaching. As it receives more data, the system "learns" and improves its patrol planning. Already, the system has led to more observations of poacher activities per kilometer.

Its key technical advance lies in its ability to incorporate complex terrain information, including the topography of protected areas. That results in practical patrol routes that minimize elevation changes, saving time and energy. Moreover, the system can also take into account the natural transit paths that have the most animal traffic – and thus the most poaching – creating a "street map" for patrols.

"We need to provide actual patrol routes that can be practically followed," Fang said. "These routes need to go back to a base camp and the patrols can't be too long. We list all possible patrol routes and then determine which is most effective."

"If the poachers observe that patrols go to some areas more often than others, then the poachers place their snares elsewhere," Fang said.

Since 2015, two non-governmental organizations, Panthera and Rimbat, have used PAWS to protect forests in Malaysia. The research won the Innovative Applications of Artificial Intelligence award for deployed application, as one of the best AI applications with measurable benefits.

In addition to helping patrols find poachers, the tools may assist them with intercepting trafficked wildlife products and other high-risk cargo, adding another layer to wildlife protection.

The researchers are in conversations with wildlife authorities in Uganda to deploy the system later this year. They will present their findings at the 15th International Conference on Autonomous Agents and Multiagent Systems (AAMAS 2016) in May.

"There is an urgent need to protect the natural resources and wildlife on our beautiful planet, and we computer scientists can help in various ways," Fang said. "Our work on PAWS addresses one facet of the problem, improving the efficiency of patrols to combat poaching."

While Fang and her colleagues work to develop effective anti-poaching patrol planning systems, other members of the USC team are developing complementary methods to prevent illegal logging, a major economic and environmental problem for many developing countries.

The World Wildlife Fund estimates trade in illegally harvested timber to be worth between $30 billion and $100 billion annually. The practice also threatens ancient forests and critical habitats for wildlife.

Researchers at USC, the University of at Texas El Paso and Michigan State University recently partnered with the non-profit organization Alliance Vohoary Gasy to limit the illegal logging of rosewood and ebony trees in Madagascar, which has caused a loss of forest cover on the island nation.

The research team worked to determine the balance of security resources in which Madagascar should invest to maximize protection, and to figure out how to best deploy those resources.

Past work in game theory-based security typically involved specified teams -- the security workers assigned to airport checkpoints, for example, or the air marshals deployed on flight tours. Finding optimal security solutions for those scenarios is difficult; a solution involving an open-ended team had not previously been feasible.

To solve this problem, the researchers developed a new method called SORT (Simultaneous Optimization of Resource Teams) that they have been experimentally validating using real data from Madagascar.

The research team created maps of the national parks, modeled the costs of all possible security resources using local salaries and budgets, and computed the best combination of resources given these conditions.

"We compared the value of using an optimal team determined by our algorithm versus a randomly chosen team and the algorithm did significantly better," said Sara Mc Carthy, a Ph.D. student in computer science at USC.

The algorithm is simple and fast, and can be generalized to other national parks with different characteristics.

The team is working to deploy it in Madagascar in association with the Alliance Vohoary Gasy.

"I am very proud of what my PhD students Fei Fang and Sara Mc Carthy have accomplished in this research on AI for wildlife security and forest protection," said Tambe, the team lead. "Interdisciplinary collaboration with practitioners in the field was key in this research and allowed us to improve our research in artificial intelligence."

Moreover, the project shows other computer science researchers the potential impact of applying their research to the world's problems.

"This work is not only important because of the direct beneficial impact that it has on the environment, protecting wildlife and forests, but on the way that it can inspire other to dedicate their efforts into making the world a better place," Mc Carthy said.