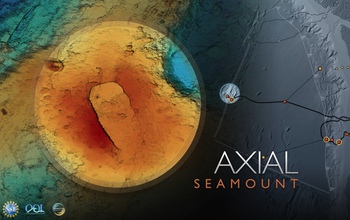 Axial Seamount, located on the Juan de Fuca Ridge in the Northeast Pacific Ocean, erupted in 2015.

A sensor array off the Pacific Northwest coast has captured the cracking, bulging and shaking from the eruption of Axial Seamount, a nearly mile-high undersea volcano, in more detail than ever before.

A series of papers published this week in the journals Science and Geophysical Research Letters -- and announced today during a press conference at the American Geophysical Union (AGU) Fall Meeting -- show how the volcano behaved during its most recent known eruption, revealing new clues about volcanoes that form where two tectonic plates are moving apart.

The studies are based on data collected by the Ocean Observatories Initiative (OOI) Cabled Array, a National Science Foundation (NSF)-funded project that brings electrical power and internet connections to instruments on the seafloor. The observatory provides new tools for understanding Earth's volcanism.

"Axial volcano has had at least three eruptions, that we know of, over the past 20 years," said Rick Murray, director of NSF's Division of Ocean Sciences and a participant in the AGU press conference. "Instruments used by Ocean Observatories Initiative scientists are giving us new opportunities to understand the inner workings of this volcano and the mechanisms that trigger volcanic eruptions in many environments. The information will help us predict the behavior of active volcanoes around the globe."

The new papers provide the first formal analyses of the seismic vibrations, seafloor movements and rock created during Axial's eruption in April, 2015.

"We have a new understanding of the behavior of caldera dynamics that can be applied to other volcanoes all over the world," said William Wilcock, a marine geophysicist at the University of Washington and lead author of one of the papers.

Most of Earth's volcanism takes place underwater. Axial Seamount, one of countless undersea volcanoes, rises seven-tenths of a mile off the seafloor some 300 miles off the Pacific Northwest coast, and its peak lies about eight-tenths of a mile below the ocean's surface.

Peering into an undersea volcano

The submarine location presents advantages for scientific studies. The crust below an undersea volcano is usually just four miles thick, roughly five times thinner than the crust that lies beneath land-based volcanoes. That means the magma chamber of an undersea volcano is not buried as deeply. The hard rock of ocean crust also generates crisper seismic images.

"One of the advantages we have with seafloor volcanoes is that we know very well where the magma chamber is," Wilcock said. "The challenge in the oceans has always been to get good observations of the eruption itself."

Through OOI, scientists have now done that.

OOI's Cabled Array provided new insights as soon as its instruments were turned on. Analyses of vibrations leading up to the eruption show an increasing number of small earthquakes -- up to thousands a day in the preceding months. The vibrations also show strong tidal triggering as the volcano approached its eruption, with six times as many earthquakes during low tides as high tides.

Once lava emerged, it flowed along a newly formed crack inside the volcano's two-mile-wide by five-mile-long opening, or caldera.

The activity continued throughout May, 2015. Then lava stopped flowing and seismic vibrations ceased. Within a month, the earthquakes had dropped to just 20 per day. The volcano has not yet started to produce more quakes.

The research is providing insights not only into the inner workings of submarine volcanoes, but into their land-based cousins, which pose a significant threat to people.

"Axial Seamount is a great natural laboratory for learning about volcanic eruptions," said William Chadwick of Oregon State University (OSU) and the National Oceanic and Atmospheric Administration (NOAA) Pacific Marine Environmental Laboratory (PMEL), and lead author of one of the papers. "Axial has a simple structure and is frequently active, but doesn't pose a hazard to people."

Scientists from OSU, PMEL and the University of North Carolina at Wilmington (UNCW) successfully predicted the eruption several months in advance.

"Precise pressure sensors at Axial measure the vertical movements of the seafloor that take place as the volcano gradually inflates like a balloon filled with magma [molten rock] between eruptions, then quickly deflates during eruptions," explained scientist Scott Nooner of UNCW, a member of the Axial team and a paper lead author.

For the first time, researchers also recorded a second phase of the eruption. It was similar to the fire-fountaining observed in ash-producing volcanoes on land in Hawaii.

"The OOI cabled array offers new opportunities to learn how these systems work," said Wilcock. "This is just the beginning."