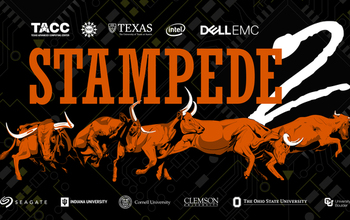 The National Science Foundation (NSF) today realized the initial phase of its $30 million investment to upgrade the nation’s computational research infrastructure through the dedication of Stampede2, one of the most powerful supercomputing systems in the world. Based at the Texas Advanced Computing Center (TACC) at The University of Texas at Austin, this strategic national resource will serve tens of thousands of researchers and educators across the U.S.

"Building on the success of the initial Stampede system, the Stampede team has partnered with other institutions as well as industry to bring the latest in forward-looking computing technologies combined with deep computational and data science expertise to take on some of the most challenging science and engineering frontiers," said Irene Qualters, director of NSF's Office of Advanced Cyberinfrastructure.

Stampede2 is the newest strategic supercomputing resource for the nation's research and education community, enabling scientists and engineers across the U.S., from multiple disciplines, to answer questions at the forefront of science and engineering. Importantly, Stampede2 leverages NSF's existing investments in computational and data science, as well as user services, allowing academic researchers access to capabilities beyond the reach of a single institution while complementing other national high-performance computing infrastructure.

Further, Stampede2 builds upon the initial Stampede system, also funded by NSF, which processed more than eight million successful jobs and delivered over three billion core hours of computation since it became operational in 2013.

Stampede2 will offer more than twice the overall memory, storage capacity, bandwidth and system performance of the initial Stampede system. Yet Stampede2 will consume only half as much power and occupy just half the physical space of its predecessor. Innovations in how the supercomputer is cooled also resulted in efficiencies: Stampede2 is connected to a chilled water system that cools more cost-effectively and with less impact to the power grid than the standard air-conditioned approach.

Once additional hardware and processors are added in the summer, Stampede2 will be able to process jobs at 18 petaflops, or 18 quadrillion mathematical operations per second, at peak performance. When Stampede2 is fully operational later this fall, the system will have roughly the processing power of 100,000 desktop computers; this increased speed and power will allow scientists and engineers to tackle larger, more complex problems that were not previously possible.

Computational scientists and engineers pursuing a wide range of applications -- from researchers who conduct large-scale simulations and data analyses on large swaths of the system, to those who interact with the system through web-based community platforms -- will access Stampede2 through the NSF-supported eXtreme Science and Engineering Discovery Environment (XSEDE).

Researchers have already started using the system to conduct large-scale scientific studies. Some preliminary findings from early user projects include:

Several leading universities are collaborating with TACC to enable Stampede2, including Clemson University, Cornell University, Indiana University, The Ohio State University and the University of Colorado at Boulder. They are joined by industry partners Dell EMC, Intel Corporation and Seagate Technology, who are providing cyberinfrastructure expertise and services for the project.

Stampede2 is expected to serve the scientific community through 2021, supporting tens of thousands of researchers during this period. An additional NSF award for $24 million was recently granted to cover upcoming operations and maintenance costs for the system.