Species faced many of the same challenges as African carnivores today 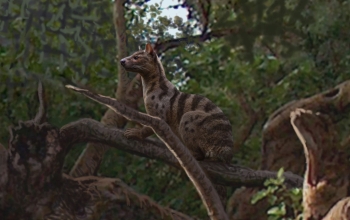 Paleontologists working in Tanzania have identified a new species of hyaenodont, a type of extinct meat-eating mammal. The study is published today, National Fossil Day, in the journal PLOS ONE and funded by the National Science Foundation (NSF).

After the extinction of the non-avian dinosaurs 66 million years ago, hyaenodonts were the main predators on the African continent. The newly discovered animal is called Pakakali rukwaensis, the name derived from the Swahili term "pakakali," meaning "fierce cat," and "rukwaensis," the word for the Rukwa Rift region of the Great Rift Valley in southwestern Tanzania.

Between 23 and 25 million years ago, newcomers arrived in Africa -- the first relatives of modern dogs, cats and hyenas -- where they coexisted with hyaenodonts for millions of years. But eventually, hyaenodonts went extinct.

"The shift from hyaenodonts to modern carnivores in Africa is like a controlled experiment," says study co-author Matthew Borths of Ohio University.

"We start with only hyaenodonts. Then the relatives of cats and dogs arrive. They coexist for a few million years, then the hyaenodonts are driven to extinction and we're left with 'The Lion King.' With Pakakali, we can start to unravel that extinction. Were the lineages competing? Were they adapting differently to a drier, more open landscape?"

"This new carnivore, discovered in Tanzania sediment deposits dating from 25 million years ago, provides new information about the transition of carnivores in older ecosystem types to carnivores in today's African ecosystems," says Judy Skog, program director in NSF's Division of Earth Sciences, which funded the research.

The new hyaenodont species was discovered in the same 25 million-year-old rocks as the oldest fossil evidence of the split between Old World monkeys and apes. At that time, the ecosystem was undergoing dramatic climate and tectonic upheavals as Africa collided with Eurasia and the modern East African Rift System formed.

The fossil gives paleontologists a glimpse of hyaenodont anatomy before modern carnivores invaded the continent, revealing that Pakakali was about the size of a bobcat.

Based on the findings of the study, hyaenodonts may have been pushed to become more specialized meat-eaters due to competition from other species. That dietary specialization may have made hyaenodonts more vulnerable to extinction in the changing African ecosystem by leaving them with fewer food choices.

Pakakali was discovered by an international team of scientists from the United States, Australia and Tanzania as part of the Rukwa Rift Basin Project (RRBP), an interdisciplinary collaboration examining the development of the modern African ecosystem. In more than a decade of exploration, RRBP researchers have described the habitat Pakakali called home along with many other animals that occupied the ecosystem.

"The environment containing Pakakali reveals a fascinating window into extinction," says Nancy Stevens, co-author of the study and a paleontologist at Ohio University. "It highlights the vulnerability of carnivorous species to rapid environmental change, a topic we are grappling with on the African continent today."