Appointment of Dr. Karla B. Heidelberg as Acting Head of Antarctic Science for the Office of Polar Programs 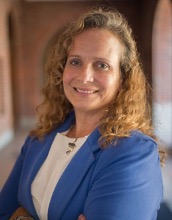 Appointment of Dr. Karla B. Heidelberg as Acting Head of Antarctic Science for OPP

The Office of Polar Programs is pleased to announce that Dr. Karla B. Heidelberg has assumed the duties of Acting Section Head Antarctic Sciences Section starting July 23, 2021. She replaced Dr. Michael E. Jackson.

Dr. Heidelberg brings experience as Program Director for Organisms and Ecosystems Science in OPP’s Antarctic Sciences Section. She has also participated in several NSF cross-directorate and cross-divisional activities including the Long-Term Ecological Monitoring (LTER) Program, Understanding Rules of Life: Epigentics, and promoting STEM diversity. She has served as an NSF Science Representative and contributed to addressing NSF infrastructure improvements in Antarctica.

She is an IPA from the University of Southern California, where her scientific interests include microbial ecology, the use of genomic applications to ecological questions, and innovative approach for STEM education. She also served as a Science Policy Fellow at the U.S. Department of State in the Office of Oceans Affairs. Her research has taken her to many sites including Antarctica, hydrothermal vent systems, and coastal areas around the world. She also coordinated a three-year global research sailing expedition for the J. Craig Venter Institute to characterize marine biodiversity. She has chaired and participated in numerous review panels for NSF, NASA, NOAA and DOE, served as an associate editor for Frontiers in Microbiology and has authored or co-authored more than 50 science articles.

Dr. Heidelberg received her Ph.D. in Marine-Estuarine and environmental Science with a concentration in Biological Oceanography from the University of Maryland in 1999. Her research primarily focused on Coral Reef and Zooplankton Ecology.