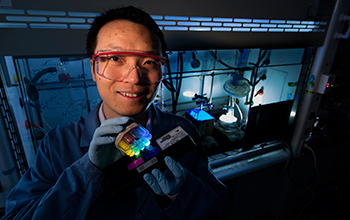 NSF's CAREER awards focus on early-career faculty.
Credit: ©2016 The Board of Regents of the University of Nebraska

The National Science Foundation has invested more than $250 million in nearly 700 recipients of the Fiscal Year 2019 Faculty Early Career Development (CAREER) awards, one of NSF's most prestigious honors.

Over the next five years, each teacher-scholar will use at least $400,000 in award funds to carry out their proposed plans to advance their field and educate the next generation of researchers. Their research is representative of all areas of science and engineering supported by NSF.

"Investment in exemplary faculty members early in their careers is key to achieving the National Science Foundation's mission to enhance the United States' science and engineering ecosystem," said NSF Director France Córdova. "Congratulations to this year's CAREER awardees for their outstanding service as researchers and teacher-scholars. We look forward to your discoveries and innovations that will advance the frontiers of scientific understanding."

The early stages of a research career are some of the most critical. Early career support can help researchers pursue work or ideas that they will build on for years or decades. Because of the importance of building this foundation for a lifetime of contributions to research and education, NSF has several programs that support early-stage researchers, including CAREER.

CAREER focuses on early-career faculty with the potential to serve as academic role models in research and education, and to lead advances within their organizations. NSF seeks CAREER proposals from all CAREER-eligible organizations, and especially encourages proposals from women, members of underrepresented minority groups, and persons with disabilities.

This year's awardees hail from 193 institutions across 47 U.S. states, as well as the District of Columbia and Puerto Rico. They bring diverse expertise from across scientific and engineering disciplines, asking questions ranging from how driverless cars may ease traffic in busy cities to how microorganisms influence the production and consumption of methane gas in Amazon peatlands.