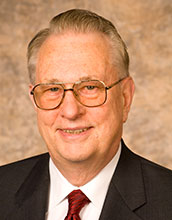 "One of the most significant ways in which government can stimulate discovery and innovation is to encourage international cooperation in research and education."


Dr. Arden L. Bement, Jr. served as the 12th director of the National Science Foundation (NSF) from November 2004 to May 2010. He served as acting director from February to November 2004 upon the departure of Director Rita Colwell. During his six-year tenure as director, Bement oversaw the establishment of the Office of Cyberinfrastructure, an increase in the NSF budget, and the broadening of NSF's international collaboration, to name a few highlights.

Bement's diverse career spanned industry, government and academia. In 1954, Bement launched his career in industry as a senior research associate at General Electric. In 1965, Bement became manager of fuels, materials, and metallurgy at Battelle Northwest Laboratories. In 1970, he left Batelle to take a position at the Massachusetts Institute of Technology as professor of nuclear materials. In 1976, Bement brought his multifaceted engineering experience to the federal government, directing science and technology policy and research and development as director of the Office of Materials Science for the Defense Advanced Research Projects Agency (DARPA). From 1979 to 1980, he served as deputy undersecretary for research and engineering for the United States Department of Defense. In 1980, Bement joined TRW, Inc., where he served as vice president for technical resources until 1988 and vice president for science and technology until 1992.

In December 2001, Bement returned to government when President George W. Bush appointed him as director of the National Institute of Standards and Technology (NIST). As director of NIST, Bement led organizational efforts to promote innovation and industrial competitiveness within the United States. Bement administered an agency budget of around $773 million and an administrative and research staff of 3,000 employees.

On November 24, 2004, Dr. Arden L. Bement was sworn in as director of the National Science Foundation. As director, Bement drew from his diverse experience working in industry, academia and government agencies to direct the only federal agency dedicated to funding basic research and education in all fields of science and engineering.

Bement's tenure as director witnessed a renewed commitment from the White House to expand federal funding of science and technology research and education. In 2006, President Bush announced the American Competitiveness Initiative (ACI), which was designed to increase American global competitiveness in science- and technology-intense sectors of the economy and which targeted NSF for budget increases over the next 10 years. Additionally, the Obama Administration's 2009 American Recovery and Reinvestment Act signaled increased federal spending on science and education as a key to federal stimulus. As a result, Bement oversaw a one-time spike in the NSF budget to over $9 billion in fiscal year 2009.

Bement emphasized the need for NSF to facilitate global collaboration in research and education as a key to maintaining global competitiveness in science and technology. In an interview in Chemical and Engineering News, he explained the importance of global collaboration, stating, "In many aspects, it's going to be the circulation of brain power around the world as much as the circulation of goods and trade around the world that's going to determine how well a nation does and how competitive it'll be in the future ... we must be much more engaged on a global scale if we're going to stay in the game." Promoting international partnerships led to the completion of several sophisticated research and experimental facilities during his tenure. He also advocated the importance of funding research into global climate change and directed a robust international research program in the Polar Regions.

In addition to international collaboration, Bement managed numerous agency initiatives aimed at strengthening the U.S. innovation base and economic position and training the U.S. workforce to operate in a high-tech global economy. Among his top priorities while at the NSF was the establishment of the Office of Cyberinfrastructure, which worked to advance research and education through expanded capabilities for cyber networking, data processing, data storage, modeling and simulation. He also supervised the completion of several high profile research centers under NSF's Major Research Equipment and Facilities Construction program.

From 2010-2012, Bement returned to Purdue as the inaugural director of Purdue University's Global Policy Research Institute, where he continued to advocate the importance of international collaboration in interdisciplinary research addressing global challenges. Bement currently holds the title of David A. Ross Distinguished Professor Emeritus of Nuclear Engineering in Purdue University's College of Engineering.