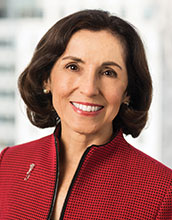 "The results of our shared commitment to basic research has brought us to a time of unprecedented capacity for innovation. If we take the opportunity we have in front of us to move science forward by deepening our partnerships and exploring new ways of doing science and imaginative ways to it, our history — a history of incredible accomplishments — foreshadows a frontier of endless possibilities."


France A. Córdova, an astrophysicist, served as the 14th director of the National Science Foundation from March 2014 to March 2020. She is the second longest-serving director in NSF history.

Prior to NSF Previously, Córdova served as NASA's chief scientist. Prior to joining NASA, she was on the faculty of the Pennsylvania State University, where she headed the Department of Astronomy and Astrophysics. Córdova was also deputy group leader in the Earth and Space Sciences Division at Los Alamos National Laboratory. She received her Bachelor of Arts degree from Stanford University and her doctorate in physics from the California Institute of Technology.

More recently, Córdova served as chair of the board of regents of the Smithsonian Institution and on the board of trustees of Mayo Clinic. She also served as a member of the National Science Board, where she chaired the Committee on Strategy and Budget. As NSF director, she is an ex officio member of the NSB.

Córdova's scientific contributions have been in the areas of observational and experimental astrophysics, multi-spectral research on X-ray and gamma ray sources, and space-borne instrumentation. She has published more than 150 scientific papers. She has been awarded several honorary doctorates, including ones from Purdue and Duke universities. She is a recipient of NASA's highest honor, the Distinguished Service Medal, and was recognized as a Kilby Laureate. The Kilby International Awards recognize extraordinary individuals who have made "significant contributions to society through science, technology, innovation, invention and education." Córdova was elected to the American Academy of Arts and Sciences and is a National Associate of the National Academies. She is also a fellow of the American Association for the Advancement of Science and the Association for Women in Science.

Director of NSF
Córdova's time at NSF was a marvelous period for her own discipline of astrophysics, a coincidence she very much enjoyed. First, in 2016, there was the confirmation of Albert Einsteinâs prediction of gravity waves from data collected by NSFâs Laser Interferometer Gravitational-Wave Observatory and its partners. Then in April 2019, the Event Horizon Telescope, an international collaboration of researchers and facilities, delivered the first image of a black hole, causing an international news sensation.

On the policy side of NSF, Córdova also promoted science and NSF, bringing a new level of cooperation between the agency and Congress. A major initiative in this arena was the development of NSF's 10 Big Ideas, or just Big Ideas. The original 10 ideas were divided into research ideas and process ideas, both of which sought to create new focus and new ideas in emerging areas of research like quantum and understanding the genome, and to improve research infrastructure and bridge gaps in shared resources. They are a new way of thinking about the work NSF does and how it relates to the needs of the nation and the world.

Post-NSF
In 2020, Córdova was appointed as a senior science advisor to the Science Philanthropy Alliance and to the board of trustees of the California Institute of Technology.

Córdova is married to Christian J. Foster, a science educator, and they have two adult children.