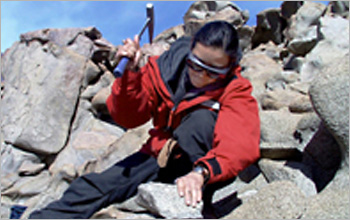 Johns Hopkins graduate student Karina Zavala breaks up a sample of igneous rock from the McMurdo Dry Valleys, Antarctica. Karina's research group led by Bruce Marsh, brought more than 1,000 pounds of rocks back to the U.S. from Antarctica. The U.S. maintains three research stations on Antarctica. The National Science Foundation operates them all. Credit: NSF

As described in our strategic plan, NSF is the only federal agency whose mission includes support for all fields of fundamental science and engineering, except for medical sciences. NSF is tasked with keeping the United States at the leading edge of discovery in a wide range of scientific areas, from astronomy to geology to zoology. So, in addition to funding research in the traditional academic areas, the agency also supports "high risk, high pay off" ideas, novel collaborations and numerous projects that may seem like science fiction today, but which the public will take for granted tomorrow. And in every case, we ensure that research is fully integrated with education so that today's revolutionary work will also be training tomorrow's top scientists and engineers.

Unlike many other federal agencies, NSF does not hire researchers or directly operate our own laboratories or similar facilities. Instead, we support scientists, engineers and educators directly through their own home institutions (typically universities and colleges). Similarly, we fund facilities and equipment such as telescopes, through cooperative agreements with research consortia that have competed successfully for limited-term management contracts.

NSF's job is to determine where the frontiers are, identify the leading U.S. pioneers in these fields and provide money and equipment to help them continue. The results can be transformative. For example, years before most people had heard of "nanotechnology," NSF was supporting scientists and engineers who were learning how to detect, record and manipulate activity at the scale of individual atoms -- the nanoscale. Today, scientists are adept at moving atoms around to create devices and materials with properties that are often more useful than those found in nature.

Dozens of companies are gearing up to produce nanoscale products. NSF is funding the research projects, state-of-the-art facilities and educational opportunities that will teach new skills to the science and engineering students who will make up the nanotechnology workforce of tomorrow.

At the same time, we are looking for the next frontier.

How We Work [Next]

Watch a two-minute video overview of NSF's mission and focus.

NSF supports some 320,900 scientists, engineers, teachers and students. This fourth grader from Silver Spring, Md., searching for microorganisms from a nearby pond, was guided by an imaginative teacher who won a Presidential Award for Mathematics and Science Teaching. NSF administers those awards. Credit: Barry Myers