In the 1630s, Pierre de Fermat set a thorny challenge for mathematics with a note scribbled in the margin of a page. More than 350 years later, mathematician Andrew Wiles finally closed the book on Fermat's Last Theorem. 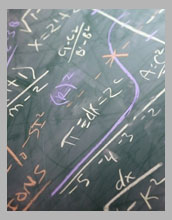 The most famous note ever scribbled in a book may very well be, "I have a truly marvelous demonstration of this proposition that this margin is too narrow to contain."

In the 1630s, French mathematician Pierre de Fermat jotted that unassuming statement and set a thorny challenge for three centuries' of mathematicians. He was referring to the claim that there are no positive integers for which xn + yn = zn when n is greater than 2. Fermat never got around to writing down his "marvelous" proof, and the margin note wasn't discovered until after his death.

Over the years, mathematicians did prove that there were no positive integer solutions for x3 + y3 = z3, x4 + y4 = z4 and other special cases. (The case for n = 4 was actually proved by Fermat independently of his cryptic remark.) However, a proof of the more general case -- that is, for all integer values of n greater than 2 -- eluded professionals and amateurs alike until Princeton University's Andrew Wiles brought 300 years of mathematical advances to bear on the problem.

Everyone who's ever taken high school geometry has run into the case when n = 2 -- in mathematical symbols, x2 + y2 = z2. Better known as the Pythagorean theorem, this equation immortalizes the ancient Greek mathematician Pythagoras, who proved that "the sum of the squares of the sides of a right triangle is equal to the square of the hypotenuse."

There are many sets of three integers for which Pythagoras's equation holds true -- for example, 32 + 42 = 52. No one ever found three integers that worked with n greater than 2, and most mathematicians suspected there weren't any. But no one could prove it.

Fermat's Last Theorem first intrigued Wiles as a teenager and inspired him to pursue a career in mathematics, but it wasn't until 1986 that a key piece to the puzzle fell into place. That year, mathematician Ken Ribet showed that solving a modern problem in math, called the Taniyama-Shimura conjecture, would allow you to prove Fermat's Last Theorem.

There was one small hitch: No one was really sure how to approach the Taniyama-Shimura conjecture, or even whether it was provable at all.

With his research in number theory already supported by NSF's division of mathematical sciences, Wiles received further NSF awards that allowed him to devote the next seven years of his career to Fermat's challenge, by way of Taniyama-Shimura.

"I'm indebted to the NSF for its support during the years I was working on Fermat," Wiles said. "It is vital to the health of mathematics in this country that long-term research projects be encouraged, even though it is not always easy to predict which ones will succeed."

At the end of a lecture on June 23, 1993, Wiles announced his proof. The announcement staggered the mathematics community and excited the world. However, as is sometimes the case with complex mathematical proofs, an error was found in part of the argument, and it was a year before Wiles, assisted now by colleague Richard Taylor, ironed out the difficulty and circulated the final manuscript.

Wiles' demonstration of Fermat's simply stated proposition is more than a hundred pages of complex math involving such esoteric concepts as Selmer groups, Hecke algebras, elliptic curves, modular forms, Euler systems and Galois representations. A more complete explanation of the proof is left as an exercise for the reader.

However, within the complexity, the proof had more practical significance -- not because of Fermat's Last Theorem itself, which despite its 350-year pedigree is more of an intellectual curiosity, but because of the route Wiles took to get there.

The Taniyama-Shimura conjecture connects two previously unrelated branches of mathematics -- number theory (the study of whole numbers) and geometry (the study of curves, surfaces and objects in space). Wiles' proved a special case of the conjecture to solve Fermat's theorem, and in 1999, a team of mathematicians including Taylor built on Wiles' and Taylor's work to prove the full conjecture.

For his efforts, Wiles received a number of awards, including the prize established in 1906 by the will of German physician and mathematician Paul Wolfskehl specifically to reward the first valid proof of Fermat's Last Theorem. The catch: The prize had to be collected before September 13, 2007. After 90 years of checking thousands of attempted proofs, the University of Göttingen awarded Wiles the Wolfskehl Prize on June 27, 1997.

As for the Fields Medal, generally considered the highest distinction in mathematics, it is awarded to mathematicians for work before age 40, and Wiles was just over 40 when he completed the final proof. Because he was ineligible for the Fields, the International Mathematics Union honored Wiles with a special silver plaque in 1998.

And what of Fermat? Because of the complexity the final proof -- certainly too large to fit in a book margin -- and because many techniques Wiles used had not been invented in Fermat's day, it's been suggested that Fermat didn't really have a proof after all.

Even so, idealists, diehards and enthusiasts continue the quest for the more elegant and "truly marvelous demonstration" that they believe Fermat had in mind.