In 1993, the world's first freely available Web browser that allowed Web pages to include both graphics and text spurred a revolution in business, education, and entertainment that has had a trillion-dollar impact on the global economy. 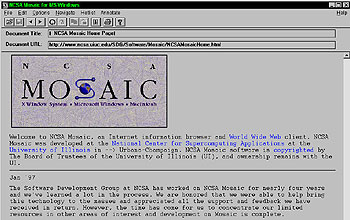 Screen shot of the Mosaic Web browser interface, circa late 1993.

In 1993, the world's first freely available Web browser that allowed Web pages to include both graphics and text was developed by students and staff working at the NSF-supported National Center for Supercomputing Applications (NCSA) at the University of Illinois, Urbana-Champaign.

Mosaic spurred a revolution in communications, business, education, and entertainment that has had a trillion-dollar impact on the global economy. Mosaic, the progenitor of modern browsers such as Microsoft Internet Explorer and Netscape, emerged at NCSA through research funded by NSF’s Computer and Information Science and Engineering (CISE) directorate.

"Without Mosaic, Web browsers might not have happened or be what they are today," said Peter Freeman, NSF assistant director for CISE. "The growth of the Web and its impact on daily life shows the kind of dramatic payoff that NSF investments in computer science research can have for all areas of science and engineering, education and society as a whole."

The history of NSF's supercomputing centers, established in 1985, overlapped with the worldwide rise of the Internet and personal computers. It was, therefore, not surprising that software developers focused on creating easy-to-use Internet tools for desktop machines. The NSF centers developed many tools for organizing, locating and navigating through information, including NCSA httpd, one of the first widely used Web server applications.

But NCSA Mosaic was perhaps the most spectacular success. With a graphical browser, programmers began to post images, sound, video clips, and multi-font text within the Web's hypertext system. Less than 18 months after its introduction, Mosaic had become the Internet "browser of choice" for more than a million users and set off an exponential growth in the number of Web servers and surfers.

NSF, through the Supercomputer Centers program, NSFnet and many other activities over the years, has continued to expand the promise of Mosaic. Today, NSF is devising strategies and plans to develop and deploy an advanced cyberinfrastructure—a state-of-the-art computing, information, networking and instrumentation infrastructure that will revolutionize the conduct of science and engineering research and education the same way Mosaic and the Internet have revolutionized how people communicate, shop and stay informed.