At 26, Esteban Araya is the youngest person to ever receive the top science award from his native Costa Rica. A graduate student in astronomy at New Mexico Tech, Araya was honored for his research into the formation of massive stars. 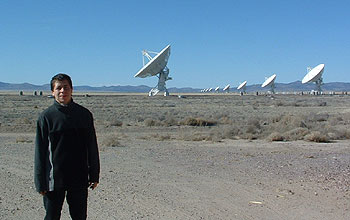 The countless stars visible to the naked eye on a clear night are a mere hint of the holdings of the universe. They are, in fact, but a hint of the number of stars in the Milky Way.

Telescopes reveal untold billions beyond what our eyes can see. And among them are a very few massive stars that are at least ten times as massive as the sun. Astronomers believe massive stars hold keys to understanding the workings of the universe. But how the giants form is still, for the most part, a mystery.

Esteban Araya, a doctoral student at the New Mexico Institute of Mining and Technology in Socorro, New Mexico, is looking for the clues that will help astronomers understand massive star formation, and his research in radio astronomy is yielding remarkable results. In May, Araya was named the 2004 recipient of his native Costa Rica's top science honor, the Dr. Clodomiro Picado Twight National Award in Science. The award recognizes Araya's role in the detection of an unusual kind of radiation from a region where massive stars are forming. At 26, Araya is the youngest person ever to receive the award.

Using Puerto Rico's Arecibo Radio Telescope, the Green Bank Telescope in West Virginia and the Very Large Array in New Mexico--three observatories supported by the National Science Foundation (NSF)--Araya and an international team of other scientists have been scanning pockets of gas in our galaxy for a specific frequency of radiation associated with massive star formation.

Massive stars are difficult to study because they are comparatively rare and they form in quick bursts. What's more, during their formation, they are shrouded in thick clouds of dust and gas, which makes them virtually impossible to detect with optical telescopes.

But as they grow, the more massive stars produce enough energy to excite molecules in the surrounding clouds. The molecules can amplify radio emissions much as a laser amplifies light. The resulting beams of radiation are known as masers, an acronym for Microwave Amplification by Stimulated Emission of Radiation.

Masers occur at specific, known frequencies that appear as bright spots on radio telescope images. By measuring and interpreting masers, astronomers can study the physical and chemical properties of the regions where massive stars form, infer details such as magnetic fields, and even estimate the stars' distance from the Earth. And while no one can yet be sure how, exactly, massive stars form, those details are helping piece together a picture.

To study the process of massive star formation, Araya and his colleagues have searched for masers produced by molecules of formaldehyde. Between 2002 and 2004, the researchers discovered three distinct regions in the Milky Way that show formaldehyde maser emission.

"Before our work, that [maser emission] had been detected in only three regions of our galaxy," Araya explains, and his team's work has added two more to the list.

Pinpointing these regions is a step forward in understanding how massive stars form, Araya says. Taking a closer look, he hopes, will help illuminate the process.

"The interesting part is that the discovery led to more questions. It's a really nice thing, because we have more work to do," Araya says.

At the moment, scientists have proposed two competing theories to explain how massive stars form. It could be that young stars attract and accumulate material from the broad disk of dust and material that orbits around them. Or, as some astronomers believe, massive stars are the result of mergers between smaller stars. To get at the question, astronomers use radio telescopes to intercept and interpret the electromagnetic signals that stars churn out as they grow, and later, as they die.

What's more, Araya notes, understanding the process of massive star formation is like looking back into our own origins, because stars are a main source of heavy elements--in astronomical terms, anything heavier than hydrogen and helium.

"Just after the Big Bang, the universe was made of hydrogen and helium. All the heavy elements later came from massive stars," explains Michael Briley, a program director in NSF's Stellar Astronomy and Astrophysics program.  In essence, stars are giant nuclear reactors; the fusion reactions that occur within them release bursts of energy as these lighter elements collide and form heavier ones. When the stars explode at the ends of their lives, these atoms are returned to space in the resulting winds.

And some end up here, on Earth. "All the heavy elements in your body," Araya says, "down to the iron in your blood, were synthesized in a star."