May explain why four-flippered swimmers now use only two 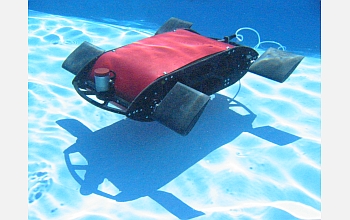 An underwater robot is helping scientists understand why four-flippered animals such as penguins, sea turtles and seals use only two of their limbs for propulsion, whereas their long-extinct ancestors seemed to have used all four.

When researchers put a joystick-controlled robot named Madeleine through her paces, they found that her top cruising speed did not increase when she used four flippers instead of two--apparently because the front flippers created turbulence that interfered with the rear flippers' ability to generate forward propulsion. Maintaining the same speed with four flippers also took significantly more energy. But Madeleine was able to make quicker starts and stops with all four.

Results from experiments such as these aid engineers in designing underwater autonomous vehicles and help scientists understand why certain traits survived over others during the process of evolution.

Scientists who study fossils of four-limbed aquatic dinosaurs, such as plesiosaurs, say the shape and musculature of their appendages suggests they used all of their flippers for locomotion. But over time, the benefits of two-flippered swimming won out. Extrapolating from experiments with Madeleine, scientists hypothesize that plesiosaurs benefited from using all fours to ambush prey.

Long was recently interviewed on "The Daily Planet," a program of Discovery Channel Canada. To watch the interview and see Madeleine in action, click here.