Batteries Made of Bacteria?

Researchers believe the energy produced by Geobacter microbes can be harnessed for electrical power, environmental remediation and biosensors 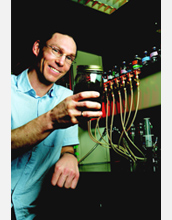 Researchers at the University of Minnesota-Twin Cities are studying a remarkable species of bacteria, Geobacter sulfurreducens, that produces electric current when attached to a graphite electrode or other conductive surface.

Geobacter's current capability already has been harnessed in so-called "microbial fuel cells" that use bacteria to convert wastewater organic compounds into electricity. Daniel Bond, a microbiologist at the University of Minnesota-Twin Cities, and his team have demonstrated the same phenomenon can be harnessed for use in batteries and biosensors.

A traditional battery or a hydrogen fuel cell requires a precious-metal catalyst such as platinum to strip electrons off the fuel source and pull them onto the electrode to generate electricity. Geobacter requires only graphite, an inexpensive and widely available form of carbon, to accomplish the same feat.

"Other species of bacteria may produce just as many electrons as they oxidize available fuels, but their cell membranes act like an insulator for electron transport," said Daniel Bond, a microbiologist at the University of Minnesota-Twin Cities. "With Geobacter, it's the difference between a rickety one-lane bridge and a modern 12-lane highway. The electrons pass easily through internal membranes and cell walls and hop onto the electrode." Each "hop" requires them to travel about 10 Angstroms.

Geobacter has proteins that guide electrons all the way to the electrode. "This makes Geobacter unique in comparison to other bacteria," Bond said. "Because of the distances involved, we know that multiple proteins are involved, which adds to the complexity and why we can't just clone a gene into E. coli to do this."

The National Science Foundation (NSF) provided funding for the study.

Geobacter was discovered in the late 1980s by geochemist Derrick Lovely, who demonstrated that a lot of metal chemistry happening in underground aquifers and sediments might be due to bacteria, not just abiotic chemical reactions. As a result, he isolated Geobacter and scientists around the world began studying its properties.

The similarities between microbes and batteries have been evident to scientists for many years and the idea of using the former to serve as the latter has been around for at least 100 years. The problem was that known species of bacteria didn't make a particularly good battery. Recently, when members of the U.S. Naval Research Laboratory found that electrodes in ocean sediments could generate electricity, the possible involvement of bacteria was more obvious. This led to the discovery that metal-reducing bacteria could catalyze this process all by themselves.

There are uses for remote power sources deep in the ocean for sensors and communications and what a Geobacter battery lacks in power, it makes up in simplicity and efficiency. "There are no moving parts, it just works," Bond said. Other research groups had made some progress in characterizing Geobacter's current generating properties.

"These bacteria exist to oxidize metal and pass electrons to whatever will take them," he said. "With the graphite electrodes, we fool the Geobacter into thinking they have an unlimited supply of metal; instead of a few bites, they get an all-you-can-eat buffet." The bacteria eat and grow and eat and grow but instead of getting fat like we do, they make additional copies of themselves. "The surface area of the electrode is limiting at some point. We don't really know how many bacteria we can pack on."

Another application for this mighty microbe is in waste-water treatment plants. The current technology requires a lot of oxygen, which gets expensive to pump in. Geobacter could help purify the water and simultaneously produce enough electricity to help pay the power bill.

Bond's group will continue to explore ways to improve Geobacter's usefulness in energy, sensors and environmental cleanup, but they also want to understand better just how the bug does what it does.

"Part of our lab is working to scale-up the technology, but most of the work focuses on 'how' and 'why,'" Bond said.

When it comes to the inner workings of a bacterial cell, scientists have 100 years of knowledge to build on. But research on how the cells get electrons to the surface is only about 10-20 years old.