For the "Few-Body Problem," a Solution From Another Plane

Complex ionization collisions can be explained with a "simple" classical model 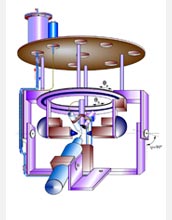 Electron collisions in a helium atom and a hydrogen molecule.

"Collision physics" might refer to calculating the impact of a car crash, or breaking up the rack of balls in a pool game. But in this case, it is the term used for firing a beam of low-energy electrons at an atom or molecule and measuring what happens.

Until recently, these subatomic particle collisions were mostly only tracked in two-dimensions, parallel to the path of the incoming electrons. But scientists have perfected an apparatus that measures a full three-dimensional cross-section of the collision. And the startling results have led a National Science Foundation (NSF)-sponsored physicist to develop a new model to explain what happens.

An article reporting both the results and the theoretical model explaining them was recently published in Nature Physics. One of the article's co-authors, Don Madison, is funded by a grant from NSF to study the theory of so-called few-body processes.

Madison, a professor at the Missouri University of Science and Technology, grew up on a cattle ranch in South Dakota. Inspired by the Soviet Union's launch of the Sputnik satellite, he decided to become a scientist to help the U.S.

"Quantum mechanics fascinated me from the first," Madison said. "I wanted to understand how the world works on the sub-microscopic level."

Madison was intrigued by the fact that, although theorists could easily explain what happens when two charged particles collide (the "two-body problem"), they did not have a solution for the interactions of three or more particles (the "few-body problem").

"Recent advancements in experimental techniques provide the opportunity to learn very detailed information about what happens at the atomic level when particles collide--and this is very exciting to me," Madison said.

Madison's co-author, Andrew Murray, is professor of physics and astronomy at the University of Manchester, UK. Murray and his co-workers designed the fully computer-controlled and computer-optimized electron spectrometer used in the research.

For these experiments, Murray bombarded atoms in a beam of helium gas with an electron beam and recorded where both the deflected projectile electrons, and those that were 'knocked off' the helium atoms, flew.

According to theory, for low incident energies, the incoming electrons and the scattered electrons should leave in opposite directions, or "back-to-back." That's because the two negatively charged particles should strongly repel each other. And that held true for atoms like helium.

"What surprised us was the big difference that we found between atoms and molecules," said Murray. "For helium atoms, the highest likelihood was that the electrons will head out in opposite directions as expected, yet for hydrogen molecules, this turns out to be the least likely thing to happen."

When this surprising result appeared, Murray called on Madison to help figure out why.

"Don is one of the world leaders in the theoretical field of electron collisions," Murray said. "He has developed a highly sophisticated model that allows him to calculate the probability of ionization from both atoms and molecules--an area that is extremely difficult both experimentally and theoretically."

Madison's model is rooted in the esoteric science of quantum mechanics. However, to describe the experiment in simple terms, he used the example of a comet.

"If we think of an atom as a miniature solar system, the nucleus would be the sun, and the electrons would be planets orbiting around it," Madison explained. "If a large comet (another electron) comes in and strikes one of the planets, depending on how it's hit, the planet could be knocked into a different orbit or out of the solar system."

"In Murray's experiment, the comet electron comes in perpendicular to the plane of the sun's rotation," Madison said. "Most likely there will be no electron there to hit. But occasionally, the comet will find an electron at that spot and hit it head-on, knocking it out of orbit."

When a negatively charged electron is knocked away, the atom is left with a positive charge, making it an "ion." The final state after the collision now has three charged particles--the incoming electron, the knocked-out electron and the ion." This process is known as "ionization."

From atoms to molecules

Murray's team began their ionization experiments using atoms. "For a helium atom, we have two protons together at the very center of the solar system (the nucleus), and two electrons in orbit around them," Madison said. "Consequently, when the comet strikes a negative electron and knocks it out of the solar system, it finds itself close to a strong attractive force, the two positive protons which sit together." The collision slows the comet and changes its direction, but it is repelled by the electron.

"Just like a comet in the solar system swings about the sun and goes back into outer space, our comet electron will swing about the nucleus and go out as well. As a result, the two electrons end up going out back-to-back."

Next, they tried the experiment on a beam of hydrogen gas--a molecule consisting of two hydrogen atoms bonded together. "The hydrogen molecule is like a binary star system with two suns (the protons) revolving about the center of the solar system," Madison said. "Since we don't know which way the molecule is pointing in our experiments, we have to average over-all possible orientations of the molecule."

In Madison's binary-star system model, this averaging is equivalent to thinking of an imaginary star with the total mass of the two suns distributed uniformly on a very thin skin of a ball, that is empty in the middle, and whose diameter is the same as the distance between the suns. That means the attracting mass of the suns no longer sits at the center of the binary-star system.

"We know from beginning physics that, if you put a comet inside such a hollow star, it would feel NO force at all from the mass of the stars," Madison said. "The same thing is true if the 'star' is a thin shell of charged protons--no charge is felt inside."

So because the comet electron has a high chance of striking the solar electron inside this "force-free" region, the positive charge of the protons can not affect the negative electrons in the same way as it does for helium.

"From classical physics, we know that if two equal-mass particles collide, and they both have the same speed after the collision, the particles will leave the collision at an angle of 90 degrees to each other," Madison said. "And that is what we see for hydrogen molecules."

To test this theory, Murray used carbon dioxide gas, which has a carbon nucleus at the center and two oxygen nuclei that can be thought of as distributed on a thin shell, as with hydrogen. This meant that no matter what the orientation of the molecule with respect to the measurement geometry, there is always a single point, positive charge at its center.

"The prediction from the model was that we should see both electrons leaving opposite each other, just like helium, and indeed this is exactly what we found," Madison said.

A simple solution to a complex problem

The solution surprised Madison. "I am astonished that we found such a simple, classical physics explanation for the difference between atoms and molecules," he said. "I would have been happy if my theory simply predicted the same thing as Murray found with an abstract 'quantum interference' explanation."

"This furthers our knowledge base in the most fundamental physical processes on an atomic scale--and as such, does not have a direct application to technologies which are being developed now," said Murray. "However, our understanding of ionization from collision processes is key to advancing a range of different applications, such as gas lasers, fusion plasmas and fluorescent lighting."

"The motivation for basic research is first to understand the universe in which we live at the fundamental atomic level," Madison said. "There is no way that I can predict if this knowledge will be a key element that an engineer or scientist will need to produce a valuable advancement in technology."

Meanwhile, the results of this experiment continue to surprise. After Madison spoke at a conference in Paris this summer, an experimentalist from Germany challenged him.

"He had the necessary apparatus to do the experiment, so I bet him a steak dinner that he would find the same thing is true for nitrogen molecules," Madison said. "I received an email from him yesterday, and he told me that he had checked nitrogen and he owed me!"