Studying spider silk, NSF-supported researchers learn about the properties of this sticky material, and their findings could lead to new bio-adhesives and glues that work under water 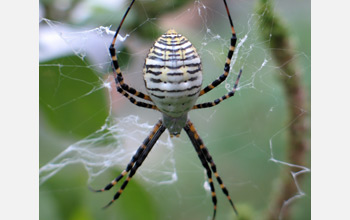 Researchers are trying to figure out the properties of the substance that makes spider webs sticky.

Ali Dhinojwala and Vasav Sahni consider themselves materials scientists, not biologists. They study surfaces, friction and adhesion. Nevertheless, they have discovered that understanding how nature makes things stick sometimes means getting up close and personal with the creatures responsible.

Making fresh samples "involved working with newly-spun spider webs in which the spider would be waiting for its prey," he added. "Then I was informed that the spiders I am working with are non-poisonous, which calmed me down a little."

Anyone who comes into direct contact with a spider web knows how sticky it is, the result of a glue-like substance the spider produces from one of the glands in its stomach. But, until recently, scientists did not understand how the glue behaved.

Dhinojwala, a professor and chair of the department of polymer science at the University of Akron in Ohio, and Sahni, a doctoral candidate there, joined with Todd Blackledge, professor of biology, to try to figure out the properties of the microscopic substance that orb-weaving spiders deposit along the round rings of silk they spin as part of their webs. Those droplets--three times thinner than the diameter of a single hair--capture the flies and other insects that spiders eat.

"It's not just the stickiness," Dhinojwala said. "We wanted to better understand the adhesion--how elastic is it? How stretchy is it? The objective was not to determine what it was made up of, but how it behaves and why is it so sticky?"

The drops are composed of highly entangled polymers, which are physically or chemically cross-linked and transmit forces very efficiently. Under a microscope, the researchers pulled on individual glue drops while measuring their force-extension behavior--not easy to do using a tiny probe.

They found the material to be both viscous and elastic, valuable properties for catching fast-flying, incoming insects--and in keeping the victims trapped long enough for the spider to subdue, and devour, them.

The material's consistency is not quite liquid, nor like honey, nor even like silly putty. "It feels like chewing gum," Dhinojwala said. "It just keeps stretching and stretching."

It is also water resistant, a useful feature since spiders work in humid conditions, including rain. In fact, the material loses its stickiness without moisture, "unlike scotch tape, which isn't sticky anymore once you put water on it," Dhinojwala said. "This glue needs water to be sticky."

The researchers hope the data will have important practical applications in developing new bio-adhesives, particularly in bandages and other products that must retain their stickiness when in contact with water. "Sometimes you want your bandages to work under water," Dhinojwala said. "Also, there are quite a number of times we want to attach things under water. Water is always a problem with adhesives. But this can hold under water."

The researchers studied only orb-weaving spiders, which are commonly found in trees and grasses. As their name suggests, they spin an orb-like web--that is, a web in the shape of a circle, with spokes and rings.

The spiders use different glands in their stomachs to secrete proteins that make up the web. The thread of the spokes--which provides the web's strength--come from a gland known as the major ampullate. Each spider has two of these.

"That thread is well-known for its strength," Dhinojwala said. "It supports a lot of weight. By weight, that silk is stronger than steel."

Sahni recalls the day the researchers tried to find something synthetic that could compare to the properties of spider silk. "Needless to say, we failed," he said.

The circles--where the glue is deposited--come from the minor ampullate gland. Each spider has two of these as well.

"The material is called spiral silk and its purpose is to catch insects, so it is sticky," Dhinojwala said. "If you look at spiral silk under a microscope, you will see these little drops--the glue." The drops come from yet another gland, known as the aggregate gland. Each spider has four of these.

"When Vasav came here, he had no clue he would be working with spiders," Dhinojwala added. "He came to work with polymers. He was really scared of spiders--he'd never touched one or handled one. His instinct was to run away. Now he goes under the bridge and catches them. He's a curious guy, and his curiosity overtook his fear."

Essentially, the spiders spun their webs in a box in the lab "and we collected the samples," Dhinojwala said. "We put the spider web in a glass plate, and used a tiny probe to poke it and measure how much force was required to pull it off. We tested the strength and the elasticity--not just its sticking power, but how elastic and stretchy it was, which is critical for stickiness, and the major crux of understanding the adhesion."

The National Science Foundation (NSF) funded the work, and the findings appeared recently in the journal Nature Communications.

Dhinojwala and his colleagues have long been interested in how nature produces its own adhesives. The University of Akron professor has studied how the gecko lizard can stick to surfaces without any glue-like substance, and currently is creating synthetic material inspired by his gecko research. "We designed tapes without glue based on what we learned from the geckos," he said.

"What the spider does is evolution at its finest," he added. "They have survived by using nature effectively. The more we learn of how nature uses these materials, the better position we will be in to take advantage of this and design things based on what we learn."

Sahni agrees. "We non-biologists get totally excited even now when we see a spider spinning a web, or when we see it catching its prey," he said. "This interest and fascination with this field prompts us to ask the whys and hows to just about everything."

Read more about the project and watch an audio slide show about the work here.

Related Awards
#0512156 Role of Structure and Dynamics of Molecules at the Interface in Controlling Friction, Adhesion and Adhesion Hysteresis
#0521261 Acquisition of a Dynamic Nano-Force Tensile Test System for Ultrathin Fibers with Environmental Control and Integrated Image Analysis