Florida alligators travel upstream and downstream between marshes and the coast 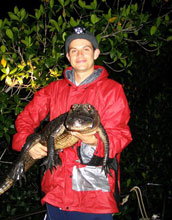 'Gators. They're everywhere in freshwater areas of the Southeastern U.S.

Now, scientists have found American alligators also swim into the brackish waters of estuaries, places where rivers meet the sea, out into the coastal zone and back again.

"However, that doesn't keep them from making use of saltier environments."

Rosenblatt and Michael Heithaus, also of FIU, conducted a study of alligators' movements between freshwater and saltwater habitats in South Florida. They published their results in a recent issue of the Journal of Animal Ecology.

In their study, which took place in Florida's Shark River estuary in the Everglades, alligators moved long distances between freshwater marshes and the estuary's mouth.

The estuary is part of the National Science Foundation's (NSF) Florida Coastal Everglades Long-term Ecological Research site, one of 26 such sites around the world.

"Alligators are 'ecosystem engineers' because their burrows, nests, and trails create unique local habitats," says Nancy Huntly, program director in NSF's Division of Environmental Biology, which funds the LTER Network along with NSF's Directorate for Geosciences.

"This research tells us that alligators also may regularly 'engineer' nutrient transfers over large distances between habitats in coastal wetland ecosystems."

Rosenblatt and Heithaus used the movements of individual American alligators as a model system to investigate whether top predators link food webs in habitats some distance apart--and whether individual alligators' movements might be an important part of the transfer of nutrients between these locales.

"Alligators in the Shark River are almost always alone," says Rosenblatt, "and appear to spend their time foraging and traveling, then resting in between these two activities."

Estuaries are critical habitats for many species with recreational, commercial and ecological importance, Rosenblatt and Heithaus wrote in their paper. "They serve as 'nurseries' for many fish and invertebrates."

Species with broad salinity tolerances are thought to connect estuaries with other coastal ecosystems. They feed in productive estuarine waters, then ferry nutrients along as they move into coastal waters.

For example, female blue crabs feed in estuaries, then swim to the mouths of these estuaries to release their eggs during spawning.

"The role of larger predators, like alligators, in doing the same thing has been largely overlooked," says Rosenblatt.

He and colleagues searched for alligators at night from an 18-foot boat. They used high-powered spotlights to find and capture alligators, then weighed and measured them. Ultimately the 'gators were fitted with acoustic transmitters to track their movements.

"Commuting" alligators, Rosenblatt and Heithaus found, make frequent trips between differing salinity zones, and vary widely in the amount of time they spend in downstream or upstream regions.

Unlike species with less mobility or smaller body sizes, "mobile large-bodied species like American alligators are buffered against short-term stress by their size," says Rosenblatt. "They have the staying power to remain in different habitats for longer periods of time."

Downstream commuters, for example, move into saltier waters to feed; it's thought that they then move back into fresher waters to recuperate from the trip.

If these alligators consistently haul out or bask at locations upstream, "they could create nutrient 'hotspots' in the mid-estuary zone," says Rosenblatt.

All this commuting leads to a chain of habitat interconnections.

"Nutrient 'translocation' by highly mobile predators like alligators," Rosenblatt says, "may be important to the entire coastal Everglades ecosystem."

A long commute, at least for American alligators, and likely for the habitats in which they live, has its rewards.