Sustainability of tropical corals in question, but some species developing survival mechanisms 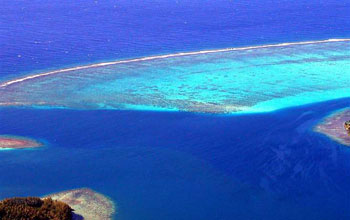 Something wicked this way comes: Ocean acidification arrives in paradises like Mo'orea.

Find related stories on NSF's Environmental Research and Education programs at this link.

Mo'orea, it's called--this island in French Polynesia that's been dubbed the most beautiful island in the world.

Here, Tahitian breezes dance across crystal blue waters and beneath the tropical seas lies a necklace of coral reefs that encircles Mo'orea like a string of brightly colored jewels.

Extensive reefs of a coral named Porites and other species form atolls, or reefs that ring Mo'orea's lagoons.

Porites are colonial corals, also known as Scleractinians, found in shallow, tropical waters throughout the Indo-Pacific and Caribbean regions.

These corals and other calcifying marine life, such as coralline algae, are also the world's primary reef-builders.  And therein lies the trouble.

The seas in which these calcifying species dwell are turning acidic, their pH slowly dropping as Earth's oceans acidify in response to increased carbon dioxide (CO2) in the atmosphere.

As atmospheric carbon rises in response to human-caused CO2 emissions, carbon in the ocean goes up in tandem.

Marine life that depends on calcium carbonate can no longer form shells or, in the case of coral reefs, skeletons.  Such marine life are found in waters that are more basic with a higher pH rather than a lower pH, which is more acidic.

Porites reefs, say scientists Peter Edmunds and Robert Carpenter of California State University at Northridge, are among the most sensitive of all corals.

Carpenter and Edmunds are two of the lead scientists at the National Science Foundation's (NSF) Mo'orea Coral Reef Long-Term Ecological Research (LTER) site, one of 26 such LTER sites around the globe.

Mo'orea is the only coral reef site in NSF's LTER network. It is funded by NSF's Divisions of Ocean Sciences and Environmental Biology.

To study the effects of ocean acidification on corals and other calcifying organisms, the biologists have been awarded an NSF SEES (Science, Engineering, and Education for Sustainability) Ocean Acidification grant.

We need to understand the chemistry of ocean acidification and its interplay with other marine processes--while Earth's seas are still hospitable to life as we know it, according to David Garrison, director of NSF's Biological Oceanography Program.

Carpenter and Edmunds hope to learn how fast--and the specific mechanisms by which--ocean acidification is affecting Mo'orea's corals and calcified algae, before the island's pristine reefs join dead and dying corals lining tropical coastlines around the world.

"Is there a way of sustaining healthy coral reefs when our oceans are acidifying?" asks Edmunds.

"Marine animals and plants from pteropods--delicate, butterfly-like plankton--to hard corals and coralline algae are affected by ocean acidification, as are the microbes that fuel ocean productivity and influence the chemical functioning of seawater.

"Corals like Porites, with their extensive distribution in tropical waters, may be ocean 'canaries in the coal mine.'"

At the current rate, he and Carpenter believe, coral reefs could disappear by the turn of the next century.

"The loss of biodiversity," says Carpenter, "would be devastating to the world's oceans--and to all of us. Tourism and fishing, in fact, entire economies, depend on coral reefs."

The scientists' recent findings are cause for hope, however. Porites, it turns out, may be developing an ability to counteract the effects of ocean acidification.

When Edmunds exposed Porites to different water temperatures and pH levels, and to plankton called brine shrimp as a food source, he found that increasing the amount of plankton in the coral's diet reduced the effects of ocean acidification.

The results are published in a recent issue of the journal Limnology and Oceanography.

Edmunds thinks that the extra plankton food may allow the coral to "bulk up," thereby changing its internal structure and increasing its ability to manufacture skeleton even in acidifying waters.

"It's a very important finding that corals can mitigate the effects of ocean acidification," says Garrison. "It will be important to uncover the specific mechanism, and to establish whether other species have this ability."

And whether, says Edmunds, it might allow Porites to survive in the more acidic oceans of the future.

Edmunds and Carpenter found that the response of tropical reefs to ocean acidification may be species specific, with some species of corals and coralline algae affected more than others.

They've also discovered that more acidicoceans may lead to changes in patterns of biodiversity in a high-CO2 world.

If the tropical seas cauldron continues to bubble with waters turning to acid, the scientists say, it will indeed lead to double, double toil and trouble--for the most beautiful island in the world, and for coral reefs around the globe.

Ultimately, it will affect the sustainability of life on a planet that--made up of 70 percent oceans--might better be called Water than Earth.