Novel Answer to That Perennial "Earth Day" Question: "What Can I Do to Help?"

Groups of citizen scientists are making pivotal contributions to research on the Earth, its place in the universe and other natural phenomena 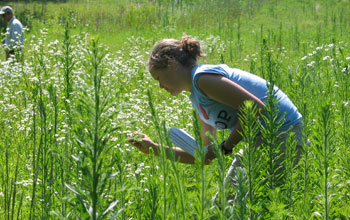 Earth Day invariably triggers discussions about the enormously complex state of the planet and begs the equally daunting question, "How can one person make a difference?"

But just one person can indeed chip in as a citizen scientist, who helps the scientific community unravel the mysteries of where Mother Nature is today and where she is headed.

The National Science Foundation (NSF) funds groups of these concerned volunteers who collect data and share their observations and insights on a scale that full-time scientists simply cannot accomplish.

"Volunteer citizen scientists are helping to generate new knowledge about biodiversity, the weather, stars and galaxies, and even the molecules in cells," says David Hanych, an NSF program manager. "The significance of their contributions is supported by various lines of evidence."

As citizen scientists contribute to science, they also learn about the natural and human-made worlds, as well as the nature and methods of science, adds Hanych. NSF supports citizen science projects because they advance discovery and promote learning.

Groups of citizen scientists provide boots on the ground in all 50 states and internationally. Joining citizen scientist groups usually doesn't require any previous scientific training or background--just curiosity and a willingness to carry out relatively simple tasks, such as monitoring backyard rain gauges, observing the brightness of stars, or taking pictures of local ladybugs, to name just a few examples.

Although citizen science projects have existed since the 1800s, the number of projects has increased dramatically during the past decade. The increase is partly due to the availability of Internet resources that are making it easier to form and to manage citizen groups and transmit data from citizen scientists to the scientific community.

The ranks of citizen scientists include families, retirees, entire school classes--and even prison inmates who want to do their part to make Earth Day more than a holiday. And regardless of the backgrounds of citizen scientists, studies show that the data collected by them has been reliable and valid, Hanych notes.

The contributions of citizen scientists have also been valuable in terms of the volume of data they provide and the originality of their insights.

For one thing, citizen scientists provide strength in sheer numbers. For example, the USA National Phenology Network, which monitors the timing of seasonal events such as spring blooms, currently engages more than 4,000 volunteers across the United States. Since 2008, these volunteers have contributed 1 million records to the NPN database--far more data than researchers could collect themselves.

In some cases, citizen scientists are the sole sources of important types of data. Henry Reges, the national coordinator of the Community Collaborative Rain Hail and Snow Network, which feeds information about precipitation to the National Weather Service and others, says even a single, real-time report of major precipitation from a volunteer in an area that is otherwise not monitored can speed the issuance of potentially life-saving flash flood warnings.

Sometimes too, citizen scientists offer new perspectives that can catalyze major breakthroughs.  Last year, for example, scientists who were having difficulty piecing together the structure of an important enzyme from an AIDS-like virus consulted a group of online gamers who were aficionados of the computer game known as Foldit.

Foldit allows players to collaborate and compete in predicting the structure of protein molecules. The result: The gamers generated models that helped the researchers refine and determine the enzyme's structure in just a few days; these models helped the researchers advance their work designing anti-AIDS drugs. (This article describes this Foldit success.)

Here is a sample of citizen science groups that have received NSF support; they illustrate the wide range of interesting and important activities taking place across the United States--not only on Earth Day, but every day.

"New projects exploring many fields of science are currently on the drawing board," says Hanych. "NSF plans to continue supporting those that actively engage members of the public in timely scientific research and measure the impact of the projects on participants and their contributions to science."