The Night Life: Why We Need Bats All the Time--Not Just on Halloween

Researchers are identifying the important ecological and economic contributions of bats, gleaning lessons from incredible bat abilities that may advance technology, and helping to battle a new fatal bat epidemic 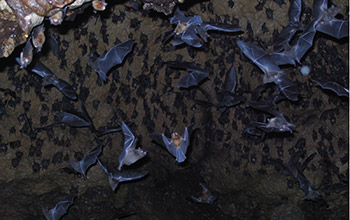 The sight of bats hanging upside down in creepy caves or fleeing in fluttery flocks from their subterranean haunts at dusk like "bats out of hell" may spook even the most rational, otherwise unflappable observer.

Nevertheless, on every day (and night) but Halloween, these much maligned creatures of the night should be loved, not feared. Why? Because, contrary to popular belief, bats do not attack people; bats do not tangle in people's hair; and even vampire bats are not true vampires. (Vampire bats lick blood but do not suck blood.)

What's more, unbeknownst to most people, bats make important contributions to ecology, the economy and even to the search for new technologies.

Bats, which live on all continents except Antarctica, are essential members of many types of ecosystems, ranging from rain forests to deserts. By fulfilling their ecological roles, bats promote biodiversity and support the health of their ecosystems.

The ecological roles of bats include pollinating and dispersing the seeds of hundreds of species of plants. For example, bats serve as major pollinators of many types of cacti that open their flowers only at night, when bats are active. In addition, bats eat copious quantities of insects and other arthropods. On a typical night, a bat consumes the equivalent of its own body weight in these creatures.

As bats fulfill their ecological roles, they provide many economically important services. For example, bats serve as essential pollinators for various types of commercially valuable crops, including bananas, mangos and guavas. In addition, bats consume many crop-eating insects and thereby reduce farmers' need for pesticides.

All told, according to a 2011 study published in Science, insect consumption by bats reduces the pesticide bill of the agriculture industry in the United States by roughly $22.9 billion per year on average. Another study, partially funded by the National Science Foundation (NSF), calculated the average annual value of Brazilian free-tailed bats as pest control for cotton production in eight counties of south-central Texas at about $741,000.

Bats offer much to the field of biomimetics, which is the science of modeling cutting-edge technologies based on natural forms. After all, the development of sonar for ships and ultrasound was partly inspired by bat echolocation. Echolocation is the navigation system used by most bats to find and follow their quick-moving insect prey at night, sometimes via daring aerial dogfights and speedy chases--all without crashing into trees, buildings or other obstructions.

Here's how bat echolocation works: A bat emits a structured high-frequency sound, usually beyond the range of human hearing, which bounces off surrounding objects and then returns echoes to the bat. By comparing the delay and structure of the echoes to those of the original sound, a bat can calculate its own distance from the objects and determine the size and shape of those objects and thereby construct a 3-D map of its environment.

Even though a bat's brain is only peanut-sized, bat echolocation is so sensitive that a bat flying 25 miles per hour in complete darkness would recognize differences in echo delays of less than a microsecond, allowing the bat to distinguish even a junebug from an underlying leaf, according to "Universal Sense: How Hearing Shapes the Mind," which was authored by neuroscientist Seth S. Horowitz, whose earlier work was funded by NSF.

How do bats stay focused on sonar echoes from their target prey without being overwhelmed by the cacophony of echoes from other objects? That question is answered by an NSF video about recent research on bat echolocation.

Another bat trait that provides potential grist for future application is the flying ability of bats, which are the only mammals that can fly on their own power. The aerodynamic repertoire of bats, which includes changing flight direction by turning 180 degrees within just three wing beats while flying at full tilt, would be the envy of any fighter pilot, said Horowitz.

Bats are such nimble flyers because of the dexterity of their wings, which--unlike insect and bird wings--are structured to fold during flight, similar to the way that a human hand folds. Also, their wings are draped by stretchy skin and are powered by special muscles. Ongoing research about the structure of bat wings and the mechanics of bat flight may ultimately lead to the development of technologies that improve the maneuverability of airplanes.

See the wonders of bat flight in a Science Nation video that describes an NSF-funded project.

The multifaceted importance of bats only compounds the tragic dimensions of a new fatal epidemic in bats known as white-nose syndrome. The disease, which is named for a fungal growth around the muzzles, wings and other body parts of hibernating bats, was first discovered in the U.S. during the winter of 2006-2007 in a popular tourist cave in upstate New York.

Since then, the continually spreading disease, which has reached the central U.S. and Canada, has killed more than 5 million bats, including up to 95 percent of some bat species in some locations. Scientists believe that white-nose syndrome--which is currently incurable, untreatable and unstoppable--will inevitably drive some bat species to extinction. The disease is similar to a fungal epidemic that is ravaging frog populations in the U.S.

The white-nose fungus causes skin lesions on the wings of hibernating bats, which may damage the animals' hydration, electrolyte balance, circulation and temperature regulation, ultimately causing death by starvation and dehydration. Behavioral changes in infected bats include a failure to wake normally in response to disturbances and premature emergence from hibernation.

The white-nose fungus is known to have existed in bats in Europe before its arrival in the U.S.. But, as far as scientists know, the fungus does not kill European bats, possibly because European bats species are genetically protected from the disease. Because the presence of the disease-causing fungus in Europe predates its arrival in the U.S., and because the fungus was first found in the U.S. in a tourist cave, scientists suspect that the disease was imported to the U.S. from Europe, perhaps on the clothing or equipment of traveling cavers.

Amazingly, the research also has shown that the little brown bat, a species common in the northeast of North America and widely affected by white-nose syndrome, has been--for unknown reasons--becoming less gregarious, going from a species that tended to hibernate in dense clusters to one that now tends to hibernate singly. By changing their behavior, these bats may be reducing disease transmission within their colonies and thereby saving themselves from extinction. By contrast, the Indiana bat, a gregarious species that is listed as endangered, is continuing to hibernate in dense clusters and will therefore probably go extinct.

"Our research gives us an indication of which species face the highest likelihood of extinction, so we can focus management efforts and resources on protecting those species," said Langwig. For example, the U.S. Fish and Wildlife Service is incorporating Langwig's study results about little brown bats into ongoing deliberations about whether to classify the species as endangered.

Kilpatrick and Langwig are currently researching other factors, in addition to social behavior, that may influence disease susceptibility. One possibility, Kilpatrick says, is that some bat species are less susceptible to white-nose syndrome because their skin hosts bacterial communities that have anti-fungal properties and so protect them from the white-nose fungus.

In addition, Kilpatrick is currently investigating whether and how particular microclimates in caves and mines used by hibernating bats may be affecting the spread of white-nose syndrome. "Some bat species or some individual bats may prefer to hibernate in caves or mines that are relatively hot or cold, or wet or dry," Kilpatrick said. "We want to know whether such environmental conditions impact susceptibility to white-nose syndrome."

Other topics that are ripe for research involve the responses of ecosystems to plummeting bat populations. "Insect populations are very variable," said Langwig. "So in order to identify the impacts of bat declines on insect populations, we would need many years of data on insect populations before the arrival of white-nose syndrome, as well as many years of data after its arrival for comparison." But because white-nose syndrome is so new and has spread so fast, scientists do not yet have enough data to determine how the absence of bats will impact their ecosystems, she said.

Other threats to bat survival besides white-nose syndrome

Other threats to bat survival include the use of pesticides and insecticides, habitat loss and the hunting of bats for bushmeat in some regions. In addition, for reasons that are not fully understood, migrating bats are apparently attracted to wind turbines; large numbers of bats have been killed on wind farms in recent years.

Learn more about bats from a Halloween chat with Horowitz sponsored by The Washington Post.