Researchers developed a software algorithm that generates turbulence, and they expect it to have applications in medicine and aerospace 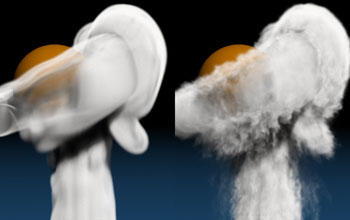 A low-resolution smoke flow (left) is compared to the same simulation with Wavelet Turbulence added.

Not too many scientists get to hear this phrase with their name at the end.

Yet four computer scientists, two of them supported by the National Science Foundation, will receive Academy Awards, the film industry's highest honor, for technical achievement in special effects. The award, to be presented Feb. 9 in Beverly Hills, recognizes an innovative software algorithm they developed that has been used in more than two dozen recent popular movies, including "Avatar," "Monsters vs. Aliens," "Sherlock Holmes," "Transformers: Revenge of the Fallen," "Hugo," "The A Team," and "Green Lantern," among others.

"As a scientist and a mathematician, this is totally foreign to me," says Doug James, associate professor of computer science at Cornell University, referring to his Hollywood honor. "I spend a lot of time dealing with abstract mathematics and algorithms, so it's gratifying to see the work have such widespread applications, including in entertainment."

Theodore Kim, assistant professor of media arts and technology at the University of California, Santa Barbara, agrees. "I'm a computer programmer, not a drama type, and I never practiced an Oscar acceptance speech in front of the mirror while growing up," he says, laughing. "Now I'm probably going to have to write one."

The software they developed, known as Wavelet Turbulence, generates realistic swirling smoke and fiery explosions that are more detailed, easier to control and faster to create than technology that was available to movie artists a decade ago.

Moreover, the software, which produces fluid simulations--in this case, fluid refers to the dynamics of air containing a particulate, such as soot--have potential important applications beyond entertainment, including in medicine and aerospace design, among other things.

"This was designed originally to be an artist-friendly tool, but we've seen interest from medical and engineering people who see its value in biomedical and astrophysical simulation," Kim says.

In medicine, the computer program could enhance understanding of blood flow turbulence--specifically how plasma moves through capillaries and veins--and how red blood cells collide with each other and capillary walls. In astrophysics, computer modeling using the software could illuminate how intergalactic gases move and, in aerospace, it could provide new insights about air turbulence, such as, how air flows across an aircraft wing, thus contributing to new airplane designs.

The program was supported in part by an NSF Faculty Early Career Development (CAREER) award, which James received in 2003. CAREER awards support junior faculty who exemplify the role of teacher-scholars through outstanding research, excellent education, and the integration of education and research within the context of the mission of their organization. NSF funded the work for five years with $400,000.

Kim, working with James, initiated the project during a postdoctoral fellowship at Cornell from 2008 to 2009.

NSF currently is funding another project James is working on, that of automatically generating sounds for computer graphics. "We can build these visuals, but they are incomplete," James says. "The results are silent movies: virtually no practical algorithms exist for synthesizing synchronized sounds automatically." NSF is supporting this project with $1.2 million through its Human-Centered Computing program.

The Academy Award-winning wavelet turbulence software, in use since 2009, built upon existing basic equations of fluid motion, known as the Navier-Stokes equations, named for two 19th century mathematicians, Claude-Louis Navier and George Gabriel Stokes, who described the motion of fluid substances.

The computer scientists--who also included Nils Thuerey of Scanline VFX and Markus Gross of ETH Zurich, a Swiss science and technology university--added a theory of turbulence developed in the 1940s by Russian mathematician Andrey Kolmogorov that enables movie artists to enrich the details, make the special effects bigger and more realistic, and to complete them in less time than before.

"Prior to the method we developed, they had ways of graphically simulating smoke and fire, but they were fairly limited," Kim says. "They always looked small. In movies, they want something bigger--a volcanic eruption, a house on fire, a forest fire--it was possible to do it, but not practical. It required weeks and weeks of time. We developed a practical method for artists to design explosions and fires in a shorter period of time--in a matter of hours, or less--and with something that looks larger and more detailed than what the artist already created."

In addition to small smoke effects, like a wisp from a cigarette or campfire, the Wavelet Turbulence software enables movie artists to create visuals of giant fireballs, volcanic eruptions, forest fires, fires and explosions even mist on water, as seen in "Alice in Wonderland."

"You can easily see the fire and smoke in many of the movies," James says. "It looks cool, and it looks real, and it's very gratifying to have such a tangible impact."

Kim agrees. "Like a lot of people in my generation, I saw the first 'Toy Story,' and I wondered how I could get to work on a movie like that," he says. "Computers seemed like the avenue to take."