Corporations, international organizations and other institutions rely on this curiosity-driven researcher to answer societal questions 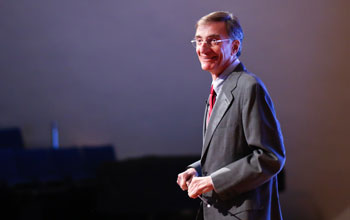 Joel E. Cohen is professor of populations at Rockefeller and Columbia Universities.

In 1995, mathematical biologist Joel E. Cohen began working to create a computerized overlay of two digital maps: One showing the distribution of the globe's population, the other an elevation model of the Earth. Collaborating with a geophysicist, he produced a single map that quantified, for the first time, the world's population by elevation.

Why did he do it? Because he could.

"Our work was driven entirely by curiosity," says Cohen, a long-time National Science Foundation (NSF)-funded scientist who is a professor of populations at Rockefeller and Columbia Universities. "We published it just for fun."

Eventually, the fun turned serious after at least two corporations heard about it. Procter & Gamble (P&G) and Intel Corporation both contacted Cohen after the research was published in 1998 wanting to learn more. P&G, a major manufacturer of consumer goods, including cleaning agents, and Intel, which makes semiconductor chips, were interested in finding out how many people live at higher elevations, since altitude has a big impact on their products.

"Altitude affects the formulation of laundry soap," Cohen says. "It influences how the bubbles mix in." For Intel, "computer chips generate heat and have to be cooled," he explains. "Cooling capacity depends on the density of the air. The higher you go, the thinner the air, and the less effective the air is at cooling. The results of using the data are now part of the thermal standards for personal computers."

Furthermore, a cancer researcher told him of a rare tumor that occurs among people who live at higher elevations. Together, the cancer researcher, other colleagues and Cohen used the data to help identify the number of individuals at risk and the mechanisms causing the cancers. The relationship involves "the decrease in oxygen tension in the bloodstream in the neck" resulting from higher altitudes, Cohen says.

For Cohen, the experience provided an important lesson about the need to support basic curiosity-driven research, even if its practical applications are not always immediately apparent.

"Nobody could have foreseen this," Cohen says. "Nobody could have imagined these things. Even we who were doing it couldn't imagine it. It just seemed like a cool thing to do. But that's why it's important for people to pursue such opportunities. The surest way to promote applications is not to tie people's hands. If what you do is beautiful, it will turn out to be useful."

He has seen this countless times during a long and distinguished career.

Cohen studies groups of living beings and their interactions, including people, insects, microorganisms, food and agriculture, all with the goal of developing concepts for understanding populations and, ultimately, for benefiting society. In order to do this, he and his colleagues combine mathematical tools with observations of concrete problems in demography, biology and epidemiology, among other aspects of populations.

For example, Cohen has spent many years studying food webs--diagrams of which species eat which other species--and since 1988, has been modeling the food web of Chagas disease, an illness transmitted by a parasite that causes intestinal and cardiac problems.

"In the absence of vaccines or practical drugs, our work has aimed to provide people in endemic, very poor rural areas with simple ecological strategies they can use to interrupt transmission," he says. The work, conducted with scientists in Argentina, "was recognized by the Pan American Health Organization, and has saved lives," he adds.

Cohen also has been testing Taylor's law--an empirical rule in ecology that describes the relationship between variance and mean in the density of samples of organisms within a study area--using data on bacterial populations in the laboratory and, more recently, trees.

He is conducting his tree research at Black Rock Forest, a nearly 4,000-acre natural living laboratory for field-based scientific research and education 50 miles north of New York City. The laboratory operated by a unique consortium of colleges and universities, public and independent schools, and scientific and cultural institutions.

In 2010, he decided to measure the mean population density of trees and the variance of population density in order to compare plots at different times. The facility had historical data in file cabinets on paper--records Cohen describes as a "treasure"--that allowed him to see changes over 75 years, although calculations "had not been done with these trees in relation to Taylor's law," he says. "However, we were delighted to find that it works very well."

To investigate why Taylor's law described these data, the researchers tested the tree censuses every five years against a simple mathematical model of population dynamics that had been published in 1969, eight years after Taylor first described his law.

Taylor's law is important in sampling agricultural pests of commercially important crops, like cotton and soybean, for example, because it provides guidance about how to adjust sampling intensity to differences in the mean population density of the pest.

"If I am a cotton grower and I am concerned about the pests that affect my plants, then I have to sample the pests to know whether they have reached a population density that requires using pesticide or other treatment," Cohen says. "If I know that Taylor's law works, and use it in my sampling design, I save money and get more information for the same sampling effort. For practical things, like pest control, it pays to know about Taylor's law and use it in your sampling."

Moreover, "if variability increases with density, this could affect extinction risks for species," he adds. "Taylor's law has been shown to apply to cases of measles, fisheries production and pest control--down-to-earth things where humans depend on other living species. We had better invest in understanding how populations of other species work, as well as populations of humans. Investing in mathematics and biology will help us to do that."

Related Awards
#1225529 Synchrony in Metapopulations at Multiple Time-Scales: Theory, Experiments and Field Data
#1038337 Scaling of Variability in Populations, Individuals, and Ecosystems: Taylor's Law and Beyond