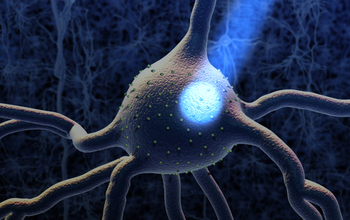 When light hits the light-sensitive proteins (shown in green) on a neuron, the neuron is activated.

The poster child for basic research might well be a one-celled green algae found in ordinary lakes and ponds. Amazingly, this unassuming creature--called Chlamydomonas--is helping scientists solve one of the most complex and important mysteries of science: How billions of neurons in the brain interact with one another through electrochemical signals to produce thoughts, memories and behaviors, and how malfunctioning neurons may contribute to incurable brain diseases such as Parkinson's disease and schizophrenia.

It may seem counterintuitive that a tiny, relatively simple organism that doesn't even have a brain could help scientists understand how the brain works. But this algae's value to brain scientists is not based on its intellect. Rather, it is based on its light sensitivity,that is, the fact that this organism's movements are controlled by light.

Chlamydomonas is light sensitive because it must detect and move towards light to feed itself through photosynthesis. You've seen this type of light sensitivity in action if you've ever noticed algae accumulate in a lake or pond on a sunny day.

The secret to the Chlamydomonas' light-chasing success is a light-sensitive protein, known as a channelrhodopsin, which is located on the boundary of the algae's eye-like structure, called an eyespot.

When hit by light, this light-sensitive protein--acting much like a solar panel--converts light into an electric current. It does so by changing its shape to form a channel through the boundary of the eyespot. This channel allows positively charged particles to cross the boundary and enter the eyespot region. The resulting flow of charged particles generates an electric current that, through a cascade of events, forces the algae's two flagella--whip-like swimming structures--to steer the organism towards the light.

The light-sensing proteins of Chlamydomonas and their ability to generate electric currents for light chasing were discovered in 2002 by a research team at the University of Texas Health Science Center in Houston that was led by John Spudich and included Oleg SIneshchekov and Kwang-Hwan Jung. The team was funded by the National Science Foundation (NSF). This team's discoveries about the algal proteins followed decades of research by Spudich, a biophysical chemist, and his collaborators on how light-sensing receptors control swimming behavior in many types of microorganisms.

"My interest in Chlamydomonas was derived from my interest in the basic principles of vision. That is, the molecular mechanisms by which organisms use light to obtain information about their environment," says Spudich. "I have long been fascinated with how microorganisms 'see' the world and started with the simplest--bacteria with light-sensitive movements (phototaxis), followed by phototaxis in more complex algae. Our focus throughout has been on understanding the basic biology of these phenomena."

When Spudich's research on light sensing by Chlamydomonas was published, it significantly advanced the basic science of light sensing and signaling in microorganisms. But at the time, no one knew that it would eventually serendipitously catapult forward the seemingly far-flung field of brain research.

Identifying the functions of neurons

Nevertheless, Spudich's discovery of the light-sensitive algal proteins was a game-changer for an NSF-funded team of brain researchers at Stanford University that was comprised of Karl Deisseroth, Edward Boyden, and Feng Zhang. Working together in a uniquely interdisciplinary team during the early 2000s, these researchers collectively offered expertise in neuroscience, electrical engineering, physiology, chemistry, genetics, synthetic biology and psychiatry. (Boyden and Zhang are now at MIT.)

A primary goal of this team was to develop a new technology for selectively turning on and off target neurons and circuits of neurons in the brains of laboratory animals, so that resulting behavioral changes could be observed in real time; this information could be used to help identify the functions of targeted neurons and circuits.

The strategy behind this technology--eventually dubbed optogenetics--is analogous to that used by someone who, one by one, systemically turns on and off the fuses (or circuit breakers) in a house to identify the contribution of each fuse (or circuit breaker) to the house's power output.

An on/off switch for neurons

But unlike household fuses and circuit breakers, neurons don't have a user-friendly on/off switch. To develop a way to control neurons, the Stanford team had to create a new type of neuronal switch. With funding from NSF, the team developed a light-based switch that could be used to selectively turn on target neurons merely by exposing them to light.

The team lacked the right type of light-sensitive molecule for the job until several important studies were announced. These studies included Spudich's discovery of the light-sensitive algal proteins, as well as research led by microbial biophysicists Peter Hegemann, Georg Nagel and Ernst Bamberg in Germany, which showed that these proteins can generate electrical currents in animal cells, not just in algae.

These studies inspired the team to insert Spudich's light-sensitive algal proteins into cultured neurons from rats and mice via a pioneering genetic engineering method that was developed by the team. When exposed to light in laboratory tests in 2004, these inserted proteins generated electric currents--just as they did in the light-sensitive algae from which they originated. But instead of turning on light-chasing behaviors as they did in the algae, these currents--when generated in target neurons--turned on the normal electrochemical signaling of the neurons, as desired.

In other words, the team showed that by selectively inserting light-sensitive proteins into target neurons, they could impart these neurons with light sensitivity so that they would be activated by light. The team thereby developed the basics of optogenetics--which is defined by Deisseroth as "the combination of genetics and optics to control well-defined events within specific cells of living tissue."

The members of the team (either working together or in other teams) also developed tools to:

"The brain is a mystery, and in order to solve it, we need to develop a great variety of new technologies," says Boyden. "In the case of optogenetics, we turned to the diversity of the natural world to find tools for activating and silencing neurons--and found, serendipitously, molecules that were ready to use."

The power of optogenetics

Thousands of research groups around the world are currently incorporating increasingly advanced techniques in optogenetics into studies of the brains of laboratory animals. Such studies are designed to reveal how healthy brains learn and create memories and to identify the neuronal bases of brain diseases and disorders such as Parkinson's disease, anxiety, schizophrenia, depression, strokes, pain, post-traumatic stress syndrome, drug addiction, obsessive-compulsive disease, aggression and some forms of blindness.

Deisseroth says, "What excites neuroscientists about optogenetics is control over defined events within defined cell types at defined times--a level of precision that is most crucial to biological understanding even beyond neuroscience. And milliscale-scale timing precision within behaving mammals has been essential for key insights into both normal brain function and into clinical problems, such as parkinsonism."

Indeed, optogenetics is now so important to brain research that it is considered one of the critical tools for the Brain Research through Advancing Innovative Neurotechnologies (BRAIN) Initiative, which was announced by President Obama in April 2013.

In addition, optogenetics is being applied to other organs besides the brain. For example, NSF-funded researchers are working to develop optogenetic techniques to treat cardiac arrhythmia.

The laws of unintended consequences

As with many pivotal scientific advances, the development of optogenetics was built upon many basic research studies that were inspired by the intellectual curiosity of researchers who could not possibly have foreseen the important practical applications of their work.

"The development of optogenetics is yet one more beautiful example of a revolutionary biotechnology growing out of purely basic research," says Spudich.

What's more, many of the varied disciplines that contributed to the invention of optogenetics--including electrical engineering, genetic engineering, physics and microbiology--may seem, on first blush, unrelated to one another and to brain science. But perhaps most surprising was the importance of basic research on algal proteins to the development of optogenetics.

Deisseroth said, "The story of optogenetics shows that hidden within the ground we have already traveled over or passed by, there may reside the essential tools, shouldered aside by modernity, that will allow us to map our way forward. Sometimes these neglected or archaic tools are those that are most needed--the old, the rare, the small and the weak."

Food for thought for anyone tempted to dismiss algae in a murky body of water as worthless pond scum!