Researcher has developed new tools and programs that enhance speed, efficiency and security of data transmission 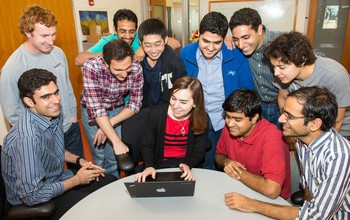 Researcher Dina Katabi and her students discuss their research results.

Imagine a room with several people in it, all talking at the same time. With everyone competing to speak, it's hard to hear any one person clearly. Wireless networks, being a shared medium, struggle with a similar problem when trying to transmit data. This "interference" is the major reason data transfers over WiFi and cell phone connections occasionally stall.

"When you speak in the room, no one else can speak near you," says Dina Katabi, a professor in the Department of Electrical Engineering and Computer Science at the Massachusetts Institute of Technology (MIT), and leader of MIT's networks research group. "It has to be: I speak first, you speak next, like slicing a cake, because you are sharing the resources."

In WiFi networks, it is common for two devices to try to send packets of information at the same time, prompting partial data loss and a rejection of both packets. This scenario repeats itself until each packet is able to transmit without interference.

"When you have two transmitters in the same spectrum transmitting at the same time, one transmitter will see interference from the other one," she explains. "This is a very fundamental problem that limits why we can't have high rates of transmission on our cell phones or WiFi connections. As you get more users--more of us trying to use our cell phones in downtown Boston or New York--the data rate that each one of us can get becomes smaller and smaller."

The National Science Foundation (NSF)-supported scientist is a communication researcher working at the intersection of computers and electrical engineering, trying to enhance the speed, efficiency and security of data transmission, focusing specifically on wireless networks.

NSF has funded Katabi's work with a total of about $4.7 million since 2005, primarily for research that involves addressing wireless interference, and increasing the reliability and the data rates of wireless networks.

She also is a recent recipient of one of this year's prestigious MacArthur fellowships, a $625,000 no-strings-attached award, popularly known as a "genius" grant. These go to talented individuals who have shown extraordinary originality and dedication in their fields.

Katabi and her colleagues are creating innovative new tools aimed at solving the transmission interference problem in order to "eliminate some of the frustrations people have today in trying to access data online, on their phones or tablets, when everything is stalled," she says. "Instead of trying to avoid interference by dividing the spectrum and time among people, we are inventing new technologies that allow people to transmit at the same time in the same part of the spectrum."

For example, she and her team designed a "zigzag" algorithm that reconstructs the content of the competing information packets even in the presence of interference, thus significantly reducing the need to retransmit. More recently, they developed a technology called "MegaMIMO," which coordinates the transmission of multiple transmitters "so their interference is canceled out in the right manner in order for all of them to transmit at the same time, so everyone can use the spectrum as if the other senders didn't exist," she says.

She also has designed a system that uses random wireless signals to protect low-powered medical devices, such as heart pacemakers, from unwanted intermediaries seeking to insert themselves undetected in the data stream.

Some wireless medical devices transmit unencrypted data, either due to limitations on their power or to ensure doctors can always access the device. The lack of encryption, however, makes these devices vulnerable to intruders.

Former Vice President Richard Cheney, for example, recently announced that he ordered the wireless signal on his pacemaker disabled to prevent tampering by terrorists, a fear that arose following an episode last year on Showtime's popular series "Homeland," where the fictional vice president is assassinated by terrorists sending a signal to his pacemaker.

Katabi and her colleagues have developed wearable devices that protect against unwanted manipulation, but allow medical personnel emergency access without security codes.

In addition to developing new technology for faster downloads, she also is pursuing new ideas, such as creating "X-ray vision" for wireless devices, using the ability of wireless signals to traverse walls. Why not give cell phones, for example, the ability to "see" through walls and obstacles?

This could be an especially valuable tool for first responders such as firefighters, or other disaster relief workers, "so they can search for survivors even if they cannot directly see them," she says. Such signals also could send commands to a computer via a person's gestures, as the signals reflect off of his or her body, she says.

Many of these technologies are years away from commercial use. "You cannot go out and buy them yet," Katabi says, but the technology transfer phase, that is, moving these tools into future products, is underway. "They will be available hopefully soon," she says. "Not tomorrow, but in a few years."