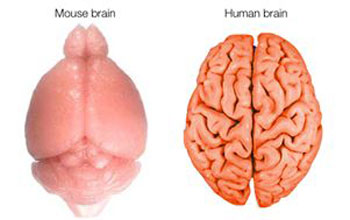 The human brain is the most complex and least understood biological structure in the known universe.

Even before BRAIN, NSF invested in fundamental brain research that produced amazing discoveries related to humans and animals. Here are 10 recent findings from NSF-funded brain research, running the gamut from insights about the brains of dinosaurs and octopuses to discoveries involving Alzheimer's, brain-controlled machines and more.

1. Surprise! Some types of wrinkles are good

Our human brain is relatively large for our body size and more wrinkled than the brains of other animals. Brain size and wrinkle numbers correlate with intelligence across species.

The outer layer of the human brain is covered by wrinkles, and the more of them the better. Why? Because these wrinkles increase the surface area available for neurons (the functional units of information processing) without increasing head size--good for women during childbirth. Human brain wrinkles are thought to be almost as hereditary as human height.

Elizabeth Atkinson of Washington University in St. Louis recently identified chromosome segments and genes that correlate with wrinkle numbers in about 1,000 baboons, which are genetically similar to humans. The next step: Pinpointing exactly where in these genetic regions folding patterns originate, which would provide insights into the evolution of the human brain.

2. Dinosaurs: Not big and dumb, after all--just big?

A new map of a generalized dinosaur brain suggests the possible existence of a cerebrum, a brain part that controls complex cognitive behaviors in mammals. Although scientists don't know what functions dinosaur cerebrums may have controlled, their existence would suggest that dinosaurs may have performed more complex behaviors than previously believed--such as forming social groups and possibly communicating.

The map is based on inferences from the genetics and organization of crocodile and bird brains. Crocodiles pre-date many dinosaurs and are their closest living relatives, while birds post-date dinosaurs.

Because crocodiles, dinosaurs and birds form an evolutionary chain, scientists believe that these animals' brain structures shared important traits, and so key features of dinosaur brains may be deduced from crocodile and bird brains.

3. A possible explanation for Einstein's intelligence

Studies of Einstein's brain conducted in the 1980s revealed that Einstein had an unusually large number of brain cells, called glia, in his cerebral cortex, and that one type of his glia was unusually large and complexly shaped. Though lacking statistical significance, these studies helped generate interest in glia.

Glia had long been dismissed as connective tissue that doesn't contribute to learning and memory, as do neurons. This idea had become entrenched because glia don't generate electrical signals--considered to be the core of brain function--as do neurons.

Harder evidence of the glia's influence on intelligence includes a 2013 study involving the injection of human glia into the brains of newborn mice. As adults, the injected mice became faster learners than control subjects.

Also, two recent papers promoted a new consensus among leading brain scientists about the importance of glia--which may even aid learning. How? Brain imaging indicates that when people learn new skills, from juggling to playing computer games, the structure of specific brain regions changes. These changes may be due to the glia's formation of myelin, a fatty insulating substance, around axons (nerve fibers), which speeds the transmission of electrical signals from axons.

A brain-computer connection is a partnership: A human brain tells a machine what to do and the machine responds accordingly.

When this type of partnership works, a brain and machine may accomplish amazing things together. For example, in experiments, students flew model helicopters using their thoughts via special head caps equipped with sensors that decoded their brain activity. In similar setups, people with physical disabilities used a robotic arm to grab cups of coffee.

But humans often struggle to control their mechanical partners, partly because it takes significant time to learn how to do so. One way to reduce this training time may be to improve mind/body awareness--as indicated by a recent study led by Bin He, director of the Center for Neuroengineering at the University of Minnesota. His results showed that that training in mind/body awareness through practices such as yoga or meditation enabled people to master a brain-computer interface almost five times faster than untrained people did.

Even as brain-computer connections are made more user-friendly, He's results underscore the continuing importance of the human element for these systems.

5. Scientists may be able to predict when you'll be primed for risky business

Recent advances in brain imaging technology may allow researchers to predict whether someone will make a safe or a risky financial decision based on certain types of brain activity prior to deciding.

These findings imply that when people are more excited, they will take bigger risks. In fact, long-shot wins (like potential lottery wins) powerfully increased both excitement and nucleus accumbens activity, encouraging people to take risks, even as they strayed from the choices of a "rational" person.

Studying people's brains while they consider their risk-taking options reveals insights about why people make certain financial decisions. These findings have implications for individual patterns of risk-taking--such as saving for a 401K--as well as for basic theories that describe group behavior.

Brain tumors are the second-leading cause of U.S. cancer-related deaths, with 70,000 diagnoses of this invariably deadly disease made annually.

Now, Stefan Bossmann and Deryl Troyer of Kansas State University are working to improve a type of promising cell therapy that has yet to be used successfully. The researchers' therapy would work by collecting a cancer patient's blood; refurbishing selected white blood cells with "cargo holds" or closed cavities that would be filled with anticancer drugs; and then re-injecting the patient's blood to deliver drugs directly to tumors.

Previous efforts to develop this type of cell therapy produced weak, leaky medicinal cavities that killed carrier cells, not tumors. But the researchers are improving these cavities by developing a new type of material for them that forms something akin to a self-assembling artificial bubble--designed to be selectively absorbed by the right type of white blood cells, remain strong enough to hold medicine and naturally self-destruct upon reaching tumors.

With preliminary experiments in mice competed, the therapy will soon be used to specifically target mice tumors for the first time, with the hope that this therapy will ultimately be able to be successfully used on human brain tumors.

7. The octopus: The eyes have it--literally

The octopus is a successful predator, partly because it has excellent eyesight--the best of any invertebrate--which enables it to visually zero in and focus on its prey.

What's more, each of the octopus's eight agile, boneless arms is equipped with about 44 million nerve cells (almost 10 percent of all of its neurons). These arm neurons are connected to the animal's brain.

When an octopus spots a tasty-looking fish, resulting visual information travels from the animal's eye to its brain. This information then travels through its arm neurons to help these soft-bodied contortionists determine how to snatch the meal.

Conversely, tactile information, such as the feel of a crab's rough shell, travels back through the octopus's arm to its brain's learning and memory centers to help these clever animals improve their hunting skills.

A team led by Clifton Ragsdale of the University of Chicago is the first to use modern molecular techniques to study how the octopus's unique nervous system processes visual information, and if the octopus's processing system significantly differs from that of vertebrates. If such differences are found, they may reveal alternative ways for brains to process visual information and learn. Resulting insights may yield important applications for robotics and image detection devices.

8. Birds' responses to climate change: It's all in their heads

Different bird species use different cues to determine when to migrate and to reproduce. Whether any particular species will be able to adjust its timing of such activities fast enough to keep up with climate change may partly depend on which cues it uses.

To varying degrees, all bird species use day length as a cue. They measure day light and anticipate seasonal changes via light-activated receptors located deep in their brains. The light penetrates their skulls without even necessarily passing through their eyes.

Because day length is unaffected by climate change, some long-distance migrators, such as the pied-flycatcher, whose main migratory cue is day length, have maintained fairly consistent arrival times at their spring breeding grounds. Yet, spring temperatures now tend to increase earlier in the year because of climate change. So such migrators now tend to arrive at their breeding grounds late relative to premature springs--and, therefore, now miss insect population peaks upon which they previously feasted. With less to eat, such migrators are now producing fewer chicks, which may cause population declines.

But most studies of the processing of day length by birds have addressed only males. Now Nicole Perfito of the University of California, Berkeley is studying how females of two bird species process day length and other cues that influence the timing of egg laying--an important factor in their potential responses to climate change.

9. Still wanted: A complete parts list of the human brain

The human brain has about 100 billion neurons. But scientists don't yet have a complete inventory of the many types of brain cells that exist and their functions. They also don't understand how electrical and chemical signals from neurons produce thoughts, behaviors and actions.

Without such knowledge, scientists cannot yet explain how traumatic injuries and neurodegenerative diseases impair brain function or should be treated. By comparison, imagine a mechanic trying to fix a car engine without a complete parts list and/or an understanding of how its engine runs!

Yet, new types of brain cells are often being identified, partly because of new brain imaging techniques that can zoom in on the brain to reveal increasing detail, just as Google Maps can zoom in on neighborhoods.

But without a universal classification system, cell types that have already been discovered may have been named and classified according to inconsistent criteria, such as shape, function or location. Therefore, some newly "discovered" cell types may really be rediscovered, renamed cell types.

To standardize the naming of neurons and create a universally accepted inventory of neuron types, Edward Boyden of MIT and others are working with the Allen Institute for Brain Science to create the first comprehensive database of types of brain cells.

Antibodies, which are proteins traditionally made by the body's immune system in response to invaders, are already established allies in our fight against the flu virus and other harmful entities. Now, they are being engineered to treat and possibly protect us against disease-linked proteins, such as those associated with Alzheimer's disease.

Such engineering requires designing antibodies that have extreme targeting capabilities so that they can be directed to go where and do exactly what is needed. Antibodies used for therapeutic or experimental reasons are usually taken from immunized animals or enormous antibody libraries. So it's difficult to custom-order them.

Peter Tessier of Rensselaer Polytechnic Institute in Troy, N.Y., is working to engineer antibodies that have precise properties. By placing DNA sequences of the target protein within antibodies, Tessier may design antibodies to bind to select proteins, such as beta-amyloid plaques, a protein linked with Alzheimer's. Further research may lead to the development of antibodies that recognize and remove toxic particles before they do harm.