Peering into the secret world of life beneath winter snows 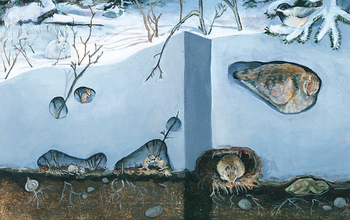 A secret world, unseen by most humans, is alive just beneath the winter snow.

Snow covers some 40 percent of Earth's land masses year in and year out. And, as scientists are discovering, snow is critical to animals and plants that live in northern latitudes, as well as those in far southern latitudes like Patagonia at the tip of South America. It ensures their -- and our -- survival.

"Without snow, plant and animal life would be completely different," says biologist Jonathan Pauli of the University of Wisconsin-Madison (UW-Madison).

Pauli and scientists such as Ben Zuckerberg, also of the UW-Madison, are members of a new breed of researchers called winter ecologists. The field, which focuses on relationships among animals, plants and their snow-covered environments, is relatively new.

"Compared to other habitats, snow ecosystems have been barely explored," Pauli says. "That's a major oversight, considering how important snow is in the lives of so many species."

That list of species includes humans. Our spring and summer water resources depend heavily on meltwater from winter snows.

With a grant from the National Science Foundation (NSF)'s MacroSystems Biology Program, Pauli and Zuckerberg conduct research on what's called the subnivium, a seasonal and sensitive refuge beneath the snow's surface that's insulated and maintains a constant temperature. It's nature's igloo.

"We know very little about plants and animals that survive winter beneath the snow," says Liz Blood, a program director in NSF's Directorate for Biological Sciences. "This research is taking an innovative approach to studying the consequences of climate change on overwintering success of plants and animals in the subnivium."

What will happen if snow disappears in a warmer world?

As a result of these altered conditions, they report in the journals Frontiers in Ecology and the Environment and PLOS One, the subnivium is showing more temperature variability and decreased -- not increased -- temperatures. Without enough snow, temperatures fall due to loss of insulation.

"In a warmer world with less snow, winter soils would be colder because the insulating snow layer on top is reduced," says Henry Gholz, a program director in NSF's Division of Environmental Biology. "That has implications for farmers planting crops in spring, as well as for the many burrowing mammals, microbes and insects that overwinter in snow."

The changes will have important implications for species that need the subnivium to survive, Zuckerberg says, "and will lead to large-scale shifts in their ranges."

Everything depends, adds Pauli, on having enough snow.

No two snowflakes, nor snows, alike

As children learn, no two snowflakes form in quite the same way. And, as northern peoples like the Inuit of Alaska know, nor are there two snows, nor snowfalls, exactly alike.

Gazelles in the Gobi Desert in northern China and southern Mongolia rely on "snow mines," oases of water from melting snows buried beneath the sand. Other species use snow in ways that are just as resourceful.

Tiny mammals like shrews don't migrate but spend their winters in the subnivium. River otters slide down snowbanks and through openings in ice-covered waters to find fish. Gangly moose use snow as a footstools, to better reach tender shoots at the ends of branches. And some of the tiniest forms of life -- fungi and other microorganisms that live in and under the snow -- remain active throughout the winter.

Snow research in a greenhouse

Since plants and animals depend on snow cover in winter, what lies ahead when the global climate's increased warmth has reduced snow levels?

"We should be very concerned about these changes," Pauli says.

He, Zuckerberg, Warren Porter of the University of Wisconsin-Madison and Brian McMahon of Operation Fresh Start are working to assess climate change effects on the sensitive subnivian habitat.

Using micro-greenhouses placed at sites in Wisconsin, Minnesota and Michigan, the ecologists mimic climate conditions predicted for the Great Lakes region by 2050. The micro-greenhouses automatically open when it snows, allowing a subnivium to form inside.

The research reveals how future subnivium conditions will affect the physiology, survival and distribution of species dependent on this realm-beneath-the-snow.

Without snow cover and its insulation, the greenhouse interior -- and its subnivian inhabitants such as hibernating amphibians -- are exposed to the winter cold.

"Our findings suggest climate change could have considerable effects on the refuge quality of the subnivium," Pauli says.

The future for plants and animals, including us, say Pauli and Zuckerberg, looks brightest as a white, not green, winter.