Environmental change is triggering an identity switch in grasslands 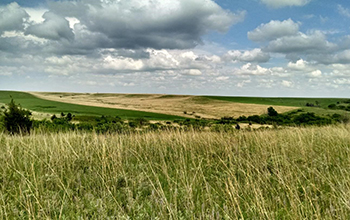 Grasslands can store up to 30 percent of the world's carbon, but new changes may risk benefits.

Since the first Homo sapiens emerged in Africa 300,000 years ago, grasslands have sustained humans and thousands of other species. Today, those grasslands are shifting. Global change -- including climate change, pollution and other widespread environmental alterations -- is transforming plant species in grasslands, and not always in the way scientists expected, a new study reveals.

Grasslands make up more than 40% of the world's ice-free land and can hold up to 30% of the world's carbon, making them critical allies in the fight against climate change. However, changes in grassland plants could put those benefits at risk.

Researchers affiliated with the Smithsonian Environmental Research Center and other institutions published the results in the journal Proceedings of the National Academy of Sciences. The report offers the most comprehensive evidence to date on how human activities are changing grassland plants.

The team looked at 105 grassland experiments around the world. Each experiment tested at least one global change factor, and some looked at three or more types of changes.

The ecologists discovered that grasslands can be surprisingly tough. In general, grasslands resisted the effects of global change for the first decade of exposure. But after 10 years, their species began to shift. Half the experiments lasting 10 years or more found a change in the total number of plant species, and nearly three-fourths found changes in the types of species. By contrast, one-fifth of the experiments that lasted under 10 years picked up species changes.

"This study points to the importance of long-term research, especially long-term experiments to understand the complex changes that are happening to Earth's living systems," said Elizabeth Blood, a program director for NSF's Division of Biological Infrastructure, which funded the research.