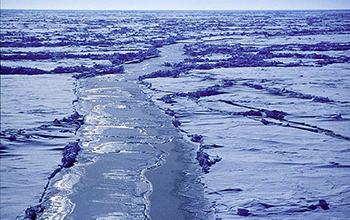 Researchers are speeding up analysis of Arctic ice and snow data through AI.

Researchers at the University of Maryland, Baltimore County have developed a technique for quicker analysis of extensive data from Arctic ice sheets to gain knowledge of patterns and trends.

Over the years, vast amounts of data have been collected about Arctic and Antarctic ice. These data are essential for scientists and policymakers seeking to understand climate change and the current trend of melting.

Researchers Masoud Yari and Maryam Rahnemoonfar have utilized new AI technology to develop a fully automatic technique to analyze ice data. They describe the technology in the Journal of Glaciology. Their effort is part of the U.S. National Science Foundation's ongoing BigData project. The data build on new image-processing algorithms developed by John Paden at the University of Kansas.

"It is great to see the cooperation between computer vision and machine learning to help predict ice changes," said Sylvia Spengler, a program director in NSF's Computer and Information Science and Engineering Directorate.

For decades, researchers have kept close track of polar ice, snow and soil measurements, but processing the large volume of available data has proven challenging.

According to Rahnemoonfar, "Radar big data is very difficult to mine and understand just by using manual techniques." The AI techniques she and Yari are developing can be used to mine the data more quickly, to get useful information on trends related to the thickness of the ice sheets and the level of snow accumulation in a certain location.

The researchers developed an algorithm that learns how to identify objects and patterns in the Arctic and Antarctic data. An AI algorithm must be exposed to hundreds of thousands of examples to learn how to identify important elements and patterns. Rahnemoonfar and her team used existing Arctic data labeled as incomplete to train the AI algorithm how to categorize and understand new data.

The algorithm's training is not yet complete, as it will need to be scaled up over multiple sensors and locations to create a more accurate tool. However, it has already successfully begun to automate a process that was previously inefficient and labor-intensive.

The rapid expansion of AI technology to understand ice and snow thickness in the Arctic is allowing scientists and researchers to make faster and more accurate climate predictions. The rate at which Arctic ice is melting impacts sea level rise, and, if scientists are better able to predict the severity of the melting, society can better mitigate the harm caused by sea level rise, the researchers say.