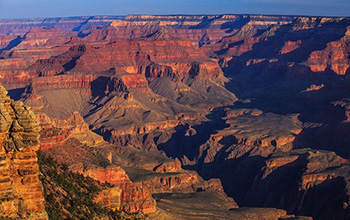 Geologists are digging into the Grand Canyon's mysterious gap in time.

A U.S. National Science Foundation-funded study led by University of Colorado Boulder scientists reveals the complex history behind one of the Grand Canyon's most well-known geologic features: A mysterious and missing gap of time in the canyon's rock record that covers hundreds of millions of years.

The research comes closer to solving a puzzle, called the Great Unconformity, that has perplexed geologists since it was first described nearly 150 years ago.

Think of the red bluffs and cliffs of the Grand Canyon as Earth's history textbook, said Barra Peak, lead author of the new study. If you scale down the canyon's rock faces, you can jump back almost 2 billion years into the planet's past. But that textbook is also missing pages: In some areas, more than 1 billion years' worth of rocks have disappeared from the Grand Canyon without a trace.

Geologists want to know why.

"The Great Unconformity is one of the first well-documented geologic features in North America," Peak said. "But until recently, we didn't have a lot of constraints on when or how it occurred."

Now, she and her colleagues think they may be narrowing in on an answer in a paper published this month in the journal Geology. The team reports that a series of small yet violent faulting events may have rocked the region during the breakup of an ancient supercontinent called Rodinia. The resulting havoc likely tore up the earth around the canyon, causing rocks and sediment to wash away and into the ocean.

The team's findings could help scientists fill in missing pieces of what happened during this critical period for the Grand Canyon -- today one of North America's foremost natural wonders.

"We have new analytical methods in our lab that allow us to decipher the history in the missing window of time across the Great Unconformity," said Rebecca Flowers, co-author of the new study. "We are doing this in the Grand Canyon and at other Great Unconformity localities across North America."