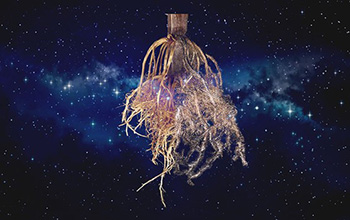 Composite artwork of a photograph and a reconstructed 3D model of the same maize root.

The shoots of plants get all the glory, with their fruit and flowers and visible structure. But it's the portion that lies below the soil -- the branching, reaching arms of roots and hairs pulling up water and nutrients -- that has deep implications for the future, according to plant physiologist and computer scientist Alexander Bucksch of the University of Georgia.

The ability to grow enough food to support the population despite a changing climate, and soil's ability to fix carbon from the atmosphere, are critical to human and other species' survival. The solutions, Bucksch believes, lie in the quality of roots.

"When there is a problem in the world, humans can move. But what does the plant do?" said Bucksch. "It says, 'Let's alter our genome to survive.' It evolves."

Until recently, farmers and plant breeders didn't have a good way to gather information about the root system of plants or make decisions about the optimal seeds to grow deep roots.

The system reliably computed all traits, including the distance between whorls and the number, angles and diameters of nodal roots for 12 contrasting maize genotypes with an 84% agreement when compared to manual measurements. The research is supported by the U.S. National Science Foundation.

Scientists who use DIRT/3D to image roots will soon be able to upload their data to a service called PlantIT that can perform the same analyses that Bucksch and his collaborators describe in their paper. PlantIT provides information on a wide range of traits from young nodal root length to root system eccentricity. These data let researchers and breeders compare the root systems of plants from similar or different seeds.

The framework is made possible by massive number-crunching capabilities behind the scenes provided by the Texas Advanced Computing Center.