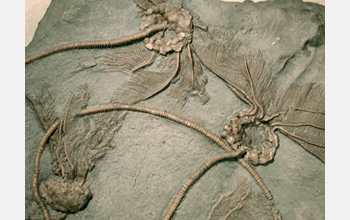 Crinoids, commonly known as "sea lilies," from the approximately 460-million-year-old Ordovician Bobcaygeon Formation in Ontario, Canada. These marine animals, which are echinoderms related to starfish and sand dollars, attached themselves to the sea floor and filtered food from the water with their feathery appendages. Crinoids are still alive today, but they are part of the Paleozoic evolutionary fauna, which was more abundant and diverse in the shallow seas that covered much of the present-day land area. The delicate specimens on this slab of rock were preserved when a strong storm toppled them to the sea floor and then buried them with a thin layer of mud.

Download the high-resolution JPG version of the image. (2.3 MB)

Researcher Shanan Peters describes how the epic ebbs and flows of sea level have caused mass extinctions over a significant stretch of Earth history. Over the past 540 million years, there have been five well-documented mass extinctions, primarily of marine plants and animals, with as many as 75-95 percent of species lost. Until recently, scientists have tended to view mass extinctions events as isolated incidents. Peters' study provides a common link for these mass extinctions and also reveals something about which species survives and which don't across these boundaries.