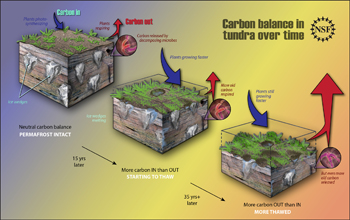 A lot of old carbon is stored deep in the tundra where it is locked in permafrost. As these areas start to thaw over about 15 years, large ice wedges in the soil get smaller causing pot-holing and soil depression. The newly available water prompts faster plant growth, and the carbon taken out of the atmosphere by the plants photosynthesizing is greater than the carbon released back into the atmosphere by plants respiring and microbes decomposing carbon. However, after about 50 years, as thawing continues and the soil settles even more, plants are growing faster yet, however the rate of plant respiration and old carbon release through microbes grows even bigger netting more carbon out into the atmosphere than into the soil.

Download the high-resolution JPG version of the image. (595 KB) 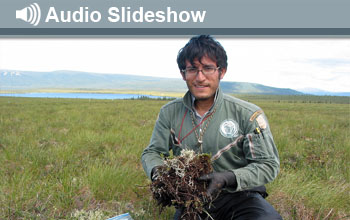 To start the audio slideshow, click on the screen or on the play arrow in the lower left. Alternatively, you can navigate with the arrow keys or view the whole set of pictures at once using the buttons in the lower right.

Ecologist Ted Schuur from the University of Florida describes how his research team used radiocarbon dating, a technique typically used to determine the age of artifacts, to measure the movement of 'old' organic carbon within Alaskan permafrost. From 2004 to 2006, Schuur and his team used radiocarbon dating to track current metabolism of old carbon in an area where permafrost thaw is increasing.

Ted Schuur, an ecologist at the University of Florida, describes the Alaskan site where he and colleagues carried out the research described in a recent article in the journal Nature. The site monitored over the past two decades, with permafrost temperature measurements beginning before the permafrost began to thaw. This detailed record coupled with Schuur's study of ecosystem carbon exchange and old carbon release provide a comprehensive picture of the dynamics of carbon exchange in response to permafrost thaw.

University of Florida's Ted Schuur, discusses his research, which documents the long-term plant and soil changes that occur as permafrost thaws, thus providing a basis for making long term predictions about ecosystem carbon balance with increased confidence. The study, published in the May 28 issue of the journal Nature has helped define the potentially significant contribution of permafrost thaw to atmospheric concentrations of carbon, which have already reached unprecedented levels. 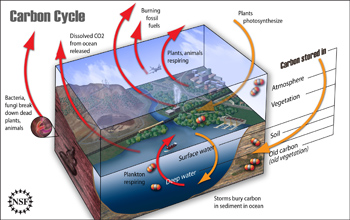 Carbon is stored in the atmosphere, vegetation, soil, deep layers of the crust and in surface and deep water. A few of the mechanisms of bringing carbon into the system are plants photosynthesizing, and storms carrying sediment down into the ocean. Decomposition by fungi and bacteria, plants and animals respiring, burning fossil fuels and carbon dioxide dissolving off of the ocean are some of the mechanisms that release carbon back out.

Download the high-resolution JPG version of the image. (578 KB) 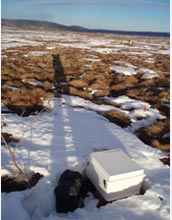 Twice as much carbon is contained in the soils and permafrost of northern ecosystems compared to the atmosphere. Because of the size and nature of the permafrost carbon pool, decomposition of previously frozen, old organic carbon is one of the most likely positive feedbacks to climate change in a warmer world. Under the direction of Ted Schuur of the University of Florida, this research used radiocarbon dating to detect the loss of old soil carbon in combination with an ecosystem-scale field manipulation to study factors that affect the release of permafrost carbon. These measurements helped quantify the lateral movement of carbon from tundra ecosystems experiencing permafrost thaw, allowing researchers to estimate the overall loss of carbon from these ecosystems.

Download the high-resolution JPG version of the image. (3.8 MB)