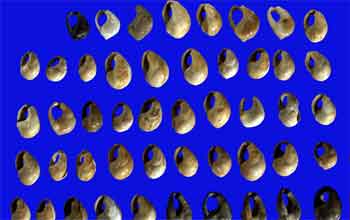 ARLINGTON, Va.—Perforated shells found at South Africa's Blombos Cave appear to have been strung as beads about 75,000 years ago—making them 30,000 years older than any previously identified personal ornaments. Archaeologists excavating the site on the coast of the Indian Ocean discovered 41 shells, all with holes and wear marks in similar positions, in a layer of sediment deposited during the Middle Stone Age (MSA).

"The Blombos Cave beads present absolute evidence for perhaps the earliest storage of information outside the human brain," says Christopher Henshilwood, program director of the Blombos Cave Project and professor at the Centre for Development Studies of the University of Bergen in Norway.

The shells, found in clusters of up to 17 beads, are from a tiny mollusk scavenger, Nassarius kraussianus, which lives in estuaries. They must have been brought to the cave site from the nearest rivers, 20 kilometers east or west on the coast. The shells appear to have been selected for size and deliberately perforated, suggesting they were made into beads at the site or before transport to the cave. Traces of red ochre indicate that either the shell beads themselves or the surfaces against which they were worn were coated with this widely used iron oxide pigment.

A few years ago, Blombos excavators found chunks of inscribed ochre and shaped bone tools that challenged the then-dominant theory of behavioral evolution, which held that humans were anatomically modern at least 160,000 years ago but didn't develop critical modern behaviors until some punctuating event 40,000 or 50,000 years ago. Henshilwood and his colleagues (including Francesco d'Errico and Marian Vanhaeren of the University of Bordeaux, France, and Karen van Niekerk of the University of Bergen) believe the Blombos bone tools and ochre show that modern behavior like the use of external symbols developed gradually throughout the Middle Stone Age, not suddenly when our ancestors spread from Africa to Eurasia.

John Yellen, NSF's program manager for archaeology, calls this a "fundamental question in paleoanthropology-how and when did our ancestors acquire social behaviors we consider essentially human? Some critics have argued", Yellen continues, "that the earlier Blombos artifacts, and similar finds at other recently excavated African sites, did not represent true symbol use. These newly found beads considerably strengthen Henshilwood's assertion that 'modern' behavior begins in Africa."

According to Henshilwood, "Agreement is widespread that personal ornaments, such as beads, incontrovertibly represent symbolically mediated modern behaviour. Until now, the oldest beads in Africa date to about 45,000 years. The discovery of 41 shell beads in sand layers at Blombos Cave accurately dated as 75,000 year old provides important new evidence for early symbolically organized behaviour in Africa."

Blombos Cave contains artifacts from both the Middle and Later Stone Ages. The artifact-rich layers are clearly separated by a layer of dune sand deposited about 70,000 years ago. While LSA strata, which are less than 2000 years old, also contain Nassarius shells, they are a different color from those in the MSA strata. Also the LSA shell sizes and the placement of the piercing differ from, and are less uniform than, the MSA shells. Sand grains surrounding the MSA artifacts, dated by optically stimulated luminescence, show they were buried—removed from sunlight, which "resets" the dating clock—75,000 years ago. Burnt lithics, or stone, found nearby in the same strata, were independently dated by thermoluminescent techniques as 77,000 years old. Thousands of individual grains of sand were dated to search for signs of mixing between the Middle and Later Stone Age layers; none was detected.

Henshilwood and coworkers thus conclude that ancient Africans deliberately selected the shells and modified them for use as beads at least 75,000 years ago. To Henshilwood, this clearly indicates that the cave's early inhabitants used symbols in modern fashion. "Once symbolically mediated behaviour was adopted by our ancestors it meant communication strategies rapidly shifted," he says, "leading to the transmission of individual and widely shared cultural values - traits that typify our own behaviour."

Excavation of the Blombos site has been funded by the National Science Foundation (US), the South African National Research Foundation, the Center National del la Rechereche Scientifique, the European Science Foundation, The University of Bergen, the Anglo Americans Chairman's Fund and the British Council.