Kristi Anseth builds onto her fast track career with $500,000 award 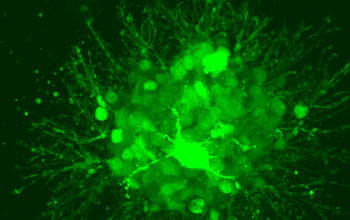 A cluster of cells found in the developing central nervous system are shown growing in a ...

Arlington, Va.—If the name Kristi Anseth hasn't yet reached our collective consciousness, just wait. Anseth, a chemical engineer at the University of Colorado at Boulder, is already reaching for the heights like a Trump skyscraper, leading a team of researchers in building the scaffolds of new materials that promise to elevate many aspects of medical care for injuries and disease.

Already a nationwide leader in the study of biomaterials, Anseth's creative work at the intersection of chemistry, biology and engineering may one day lead to wide use of easily replaceable body parts for people suffering from injuries or chronic conditions.

The National Science Foundation (NSF) has named Anseth, 35, to receive the Alan T. Waterman Award, the foundation's most prestigious for a young researcher. The award includes a medal and a $500,000 grant over a three-year period to carry out research or advanced study in the field and institution of her choosing. NSF is an independent federal agency that supports fundamental research in science and engineering across all disciplines at the nation's colleges and universities.

Anseth's award is based on groundbreaking work in new biomaterials that are engineered to help the body heal itself. Unlike synthetic body parts, such new materials may lead to new treatments for damaged knees, hips and even heart structures that will contribute to faster healing and a quicker return to a better quality of life. And despite the volume of awards, publication citations and patents listed on her resume, Anseth speaks passionately of what "can be."

That exuberance struck a chord 12 years ago with Nicholas Peppas, Anseth's academic advisor at Purdue University, where Anseth transferred after attending Williston State College in her native North Dakota. There, she played volleyball and basketball and became an academic All-American in her second year as a basketball player.

Choosing academics over athletics, Anseth transferred to Purdue, where she attracted Peppas's attention. He, too, saw what could be, and encouraged her to go on to graduate school.

Good advice, apparently, because from that point, Anseth started on a fast track toward her Ph.D., and she hasn't slowed her pace since. An able and focused student, she achieved a doctorate at CU-Boulder in 1994, just two years after completing her bachelor's degree at Purdue. A driven researcher, she was the first engineer and the only woman engineer to become an investigator for the Howard Hughes Medical Institute. A creative scientist, she combined her knowledge of biology, chemistry and engineering into an interdisciplinary focus on tissue engineering, allowing her to find ways to develop new synthetic "scaffolds," or templates to regulate cell behavior and function, and to promote ways for cells to proliferate and form natural, but new, living tissues.

"The scaffold is really just re-created tissues, and if you think of it like a building, this is a framework from which other structures can be formed," Anseth explains. The scaffold itself is designed to be injected into the body in liquid form. But when molecules are introduced and then light-activated, a gel-like material is formed that, when injected, provides the affected area with strength, stability and flexibility.

Anseth's lab was the first to develop light-activated biomaterials that would degrade and interact with cells, while promoting tissue regrowth. The hope is that these biodegradable, flexible materials may be available within a decade for medical procedures that will allow the "injection" of new body parts into people who suffer from debilitating injuries or diseases -- without the trauma of major surgery.

"We still have to answer some questions about how to make a scaffold structurally and mechanically able to produce functional cartilage, how to accelerate cartilage formation and control degradation of the scaffolds, and then fabricate the scaffolds in such a way as to minimize surgical invasiveness while facilitating their placement during a procedure," Anseth says.

Anseth's prior awards come from many sectors. She earned a Colburn Award from the American Institute for Chemical Engineers as the most outstanding individual in that field under age 36. She received a 2001 Materials Research Society Young Investigator Award. She also received an NSF Faculty Early Career Award (CAREER) to develop a new class of polymers that can be used for orthopedic applications, such as bone repair. Her research articles, published in more than 80 journals, have been cited some 1,300 times.

Anseth is also an award-winning teacher. Her mentoring of students has garnered them no fewer than eight NSF Graduate Research Fellowships and numerous other awards from major technical societies, including the Materials Research Society, American Chemical Society and the Society for Biomaterials, for outstanding graduate research.

"I am fortunate to have great students. I get to talk to them about research ideas, and then they translate the ideas to real results through their hard work," Anseth says.

Anseth also retains a positive outlook about chemical engineering. In 1994, the year she received her doctoral degree, Anseth was one of only 113 women among the 725 new Ph.D.s awarded in her field nationwide, according to NSF's Survey of Earned Doctorates. While 25 percent of Ph.D.s in chemical engineering are now awarded to women, the numbers are even higher at CU-Boulder.

"These students are being exposed to an interdisciplinary environment, and they're poised to explore exciting new directions for our field."

The Waterman Award, created in 1975, is named for NSF's first director, Alan T. Waterman, and recognizes demonstrated individual achievements in scientific or engineering research that place the awardee at the forefront of his or her peers. Criteria include originality, innovation and significant impact on the individual's field of science or engineering. Candidates must be U.S. citizens or permanent residents, and may not be more than 35 years old, or seven years beyond receiving a Ph.D., by the end of the year in which nominated.

"I'm very humbled by this award, and it hasn't really sunk in yet," Anseth revealed.

Do not worry. Sinking in is not a concept for Kristi Anseth. She's too busy, thankfully -- creating and building for the future benefit and better health of many people.