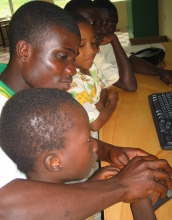 "In our first full week, we had classes filled to capacity in each time slot," said CBA pr

ARLINGTON, Va.—Fluorescent pink key chains may not immediately call to mind "high-tech," but for students in Sekondi-Takoradi, Ghana, key chains designed and manufactured by their own hands on modern fabrication tools represents the first link from the high-tech world to the world they live in.

In July and August, a team from MIT's Center for Bits and Atoms (CBA) deployed its sixth field "fab lab," based on the campus of the Takoradi Technical Institute in the sister cities of Sekondi and Takoradi in Ghana's southwest corner. Members included CBA program manager Sherry Lassiter, CBA's director, Neil Gershenfeld, and graduate students Amy Sun and Aisha Walcott.

With about $20,000 worth of equipment, a fab lab is a hands-on laboratory that provides the technology to let people build just about anything from inexpensive and readily available materials. The goal of the fab lab is to help people use advanced information technologies to develop and produce solutions to local problems.

Beyond key chains, the Ghana lab is working on practical projects including antennas and radios for wireless networks and solar-powered machinery for cooking, cooling and cutting. Each of these activities was developed in collaboration with local users, ranging from street children to tribal chiefs, to address the most important local needs.

"End of second week...enthusiasm as seen in [the] first week has not waned but increased," Sun wrote in an e-mail from a local Internet café. "Students are taking [or have] just completed their exams and are coming to the lab begging to take a class or get trained on the equipment. Begging. No, really, actually begging."

The idea for the fab labs arose from CBA research on the ultimate "personal fabricator" -- a machine that can make any machine, including itself -- supported by a "wildly oversubscribed" course at MIT called "How to Make (Almost) Anything," according to Gershenfeld. CBA is exploring the interface between computer science and physical science, funded by a $13.75 million Information Technology Research award from the National Science Foundation (NSF).

"Instead of bringing information technology to the masses, the fab labs bring information technology development to the masses," Gershenfeld said. "For our education and outreach efforts, rather than telling people about what we’re doing, we thought we’d help them do it themselves. We've been pulled around the world by the voracious demand we've found each time we've deployed a fab lab." The fab labs provide an accessible approximation of the tools CBA has on campus, and over time, Gershenfeld said, components of the labs will be replaced with components made in the labs until eventually the fab labs themselves are self-reproducing.

"We are producing key chains by the pocketful," Sun wrote. "At first blush this might not sound profound; however, most students show up in our lab with zero to very little computer skills. They so desperately want fluorescent pink key chains that they eagerly spend hours in the process."

Besides the lack of computer skills and limited Internet connectivity, the Ghana fab lab highlights other practical challenges in bringing high-tech to developing areas. For example, with humidity near 100 percent and no air conditioning, the cardboard, paper and card stock used to prototype objects turn soggy. And in a country with a 2003 per capita income of $320, even the cheapest of materials can be hard to come by. One of the earliest tasks for Sun was to seek out readily available local supplies, such as veneer wood, coconut tree bark and rubber.

The fab labs around the world use their common capabilities in very different ways. For example, the fab lab that opened in August 2002 at the Vigyan Ashram near Pabal in the western part of Maharashtra, India, has focused on developing agricultural instrumentation. Interests there include testing milk for quality and safety, and tuning diesel engines to run more efficiently, particularly with local biofuels. Another fab lab, in Bithoor in the Indian state of Uttar Pradesh, (operated in cooperation with the Indian Institute of Technology, Kanpur) is targeting 3-D scanning and printing for rural artisans, such as producing the wooden blocks used in Chikan embroidery by women's cooperatives.

The first international fab lab was established in Cartago, Costa Rica, in July 2002 at the Costa Rica Institute of Technology. There, undergraduates mentor local high-school students as they build tools for local educational, community development and economic challenges. This was followed in June 2003 by a fab lab far above the Arctic Circle in Solvik Gård near Tromsø, Norway. In cooperation with engineers from Norway's Telenor and Finland’s UPM-Kymmene, that lab is developing wireless networks and animal radio collars to aid nomadic herding.

A delegation from the Norwegian fab lab recently visited the flagship fab lab at Mel King's South End Technology Center in inner-city Boston to establish a collaboration around their common interest in building community wireless networks. A high point of this visit was the former head of the Sami reindeer herders' association singing a traditional "joik" (folk song) for the audience at a local restaurant. Future exchanges are planned between these communities.

"The most advanced technologies are needed in some of the least developed places," Gershenfeld said. The Center for Bits and Atoms and its fab labs share the goal of "bringing together the best features of the bits of new digital worlds with the atoms of our physical world."