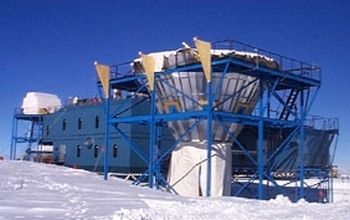 Researchers from Carnegie Mellon University, using a National Science Foundation (NSF) microwave telescope in Antarctica, have made a crucial measurement of cosmic background radiation that may help science to settle a fundamental question of whether the universe will expand forever or collapse back upon itself.

Scientists measured the dimensions of extremely distant gas clouds with the Viper Telescope, operated by the Center for Astrophysical Research (CARA) in Antarctica at NSF's Amundsen-Scott South Pole Station. Jeffrey Peterson, a Carnegie Mellon astrophysicist and the lead scientist on the Viper project, announced the findings on Dec. 18 in Paris, France at the Symposium on Relativistic Astrophysics. The biennial meeting attracts the world's foremost astronomers and astrophysicists. "These findings indicate that the material of the universe was given just the right kick by the Big Bang to expand forever, never collapsing, but also never becoming so dilute that gravity can be ignored," according to Peterson. "This delicate balance is hard to understand unless inflation theory, or something akin to it, is correct."

Viper is used to make images of the faint structure, an anisotropy, seen in the sky. Astrophysicists widely accept that if the expansion of the universe were slowing, the glowing clouds of gas observed with Viper would be, in astronomical terms, relatively close by and would measure as much as one-half degree of arc across the sky. The discovery announced this week--that the size of extremely distant gas clouds is, indeed, one-half degree on the sky indicates that the expansion of the universe is slowing at just the rate predicted by inflation theory.

Inflation theory holds that just after the Big Bang, as the universe expanded and cooled, it passed through a critical temperature, currently thought to be 100 billion degrees--which changed the character of the laws of physics. As the proto-universe passed through this critical temperature threshold, there was an enormous release of energy, which caused the universe to "inflate," or to dramatically increase in size. This inflation process would have caused the universe to expand with a precise "escape velocity," which would provide an explanation for the Viper findings. The newly released measurements indicate that the universe has just such an escape velocity, Peterson stressed. The anisotropy measurement is just a small part of the data collected from the telescope, which provides a snapshot of the universe as it was 300,000 years after the Big Bang, the cataclysmic event that set in motion the forces that created today's universe.

Previous cosmic background telescopes have been smaller than Viper and have not been able to focus in fine enough detail to measure the clouds as viper can. However, the CARA group's work with these earlier prototypes was critical to the new discovery. Karl Erb, the director of NSF's Office of Polar Programs, said "This advance is a fitting testament to the vision and dedication of the CARA scientists whose pioneering work proved that the South Pole is an ideal site for these delicate measurements." The two-meter Viper telescope began operation only last February.

Further observations by Viper and other telescopes under development by CARA's member institutions are planned to verify the newly released result.