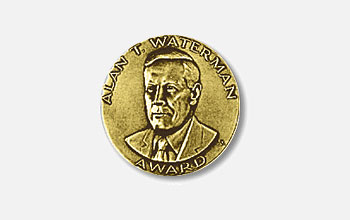 Background. The National Science Foundation's (NSF) annual Alan T. Waterman Award honors an outstanding young U.S. scientist or engineer. The awardee receives a grant of $1 million over five years for scientific research or advanced study in any field of science, plus a medal and other recognition.

Public Law 94-86 of the 94th Congress established the Waterman Award in 1975 to mark the 25th anniversary of the NSF and to honor its first director, Alan T. Waterman.

Criteria. A candidate must be a U.S. citizen or permanent resident. He or she must be 40 years of age or younger, OR not more than 10 years beyond receipt of the Ph.D. degree, by December 31st of the year in which they are nominated.  The candidate should have demonstrated exceptional individual achievements in scientific or engineering research of sufficient quality to be placed at the forefront of his or her peers. Criteria also include originality, innovation and a significant impact on the individual's field.

Candidates. Nominations come from responses to a call for nominations sent to universities and colleges; scientific, engineering and other professional societies and organizations; and members of the National Academy of Sciences and the National Academy of Engineering. The solicitation is also made available on the NSF web site. Candidates are nominated on the basis of the above criteria.

Selection. The Waterman Award Committee reviews all nominations and supporting documentation, then forwards its recommendation to the NSF director and to the National Science Board for a final determination.

Recipients. Recent recipients include the following: