"Vital Information" - Laureates of the 2002 National Medal of Science 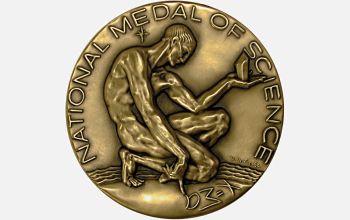 What: For four decades, Darnell has been a leader in researching how genes and molecular signalling control cell processes. He conducted the first quantitative biomedical studies on animal viruses. Those studies led to an understanding of the chronology of viral RNA and protein synthesis.

In 1962-63, Darnell and his colleagues discovered that RNA was manufactured as a precursor molecule that was cut in two before it was used by the cell to make protein, the first evidence for RNA processing. In 1971, Darnell and colleagues achieved the first direct evidence for RNA processing by identifying specific events that led to the formation of the mature form of mRNA, rRNA and tRNA, as converted from their precursor molecules.

Darnell's more recent discovery of an important new signaling pathway, called JAK-STAT (signal transducers and activators of transcription) provided the clearest route of signaling from cell surface to genes in the nucleus.

Darnell has been a guiding force behind the creation of a nationally acclaimed faculty at Rockefeller University. From the mid-1980s, he helped to establish more than 15 new junior faculty positions at the university. Each became a head of a major laboratory. Ten of the first 12 recruits in the program became full professors, and more than 20 young scientists became tenured.

What: Through her research, Witkin was largely responsible for creating the field of DNA mutagenesis and DNA repair, which has played an important role in the biochemical sciences and in clinical radiation therapy for cancer.

Witkin bolstered the notion of a genetic repair process in bacteria by observing that slowing the growth rate of bacteria cultured in the dark prevented the accumulation of a certain class of ultra-violet induced mutants, to become known as the dark repair mechanism.

Subsequent investigations into DNA repair led to her discovery of genes that can change bacterial resistance to DNA-damaging agents. The discovery of the E.coli's "SOS" response showed that DNA damage caused by radiation or mutagenic chemicals induces the expression of some 40 genes that are otherwise repressed.

Brauman's firsts in the field of chemistry include: showing that many simple organic compounds have reversed acidity and basicity between the gas and liquid phase and determining the accurate electron affinities of many radical molecules, which allowed them to be classified.

Brauman developed techniques for exploring and understanding energy transfer and its effects on reaction dynamics.

In recent research, Brauman has shown that simple hydrogen-bonded complexes can have structures and properties quite different than predicted through conventional methods, which promises to change scientific views about hydrogen bonding characteristics in chemistry and biology.

What: During World War II, Beranek designed new aircraft voice communications that overcame communication problems at high altitudes, where many aircraft operated. His design of microphones and earphones became standard throughout the U.S. military and the British Royal Air Force. He also developed noise insulation methods for crews inside aircraft. He earned a Presidential Certificate of Merit for his work.

Beranek joined the faculty of the Massachusetts Institute of Technology (MIT) in 1948, where he and MIT colleagues formed BBN Technologies, which would become renowned for its acoustics research and consulting. During the introduction of jet aircraft into the U.S. commercial and military fleets, Beranek made a major contribution by developing measurable criteria of the effects of jet noise on people.

Beranek was also a leader in architectural acoustics. His research on the acoustic characteristics of 55 concert halls throughout the world, published in a 1962 book, Music Acoustics and Architecture, has no peer. Beranek has continued to publish updates to his works as new technologies are introduced.

In 1971, Beranek led a group of investors to own and operate WCVB-TV, Channel 5 in Boston, where Beranek's leadership turned the station into a recognized nationwide leader for superb local programming.

What: Glimm has made outstanding contributions to shock wave theory, in which mathematical models are developed to explain natural phenomena that involve intense compression, such as air pressure in sonic booms, crust displacement in earthquakes, and density of material in volcanic eruptions and other explosions. Glimm also has been a leading theorist in operator algebras, partial differential equations, mathematical physics, applied mathematics and quantum statistical mechanics.

Glimm's work in quantum field theory and statistical mechanics had a major impact on mathematical physics and probability and dramatically raised the scientific level of those fields.

Glimm established a center of applied mathematics at the State University of New York at Stony Brook, where, through a network of collaborations with research groups elsewhere, he has been a key player in present-day research in applied mathematics.

The theory of plate tectonics he advanced in 1968 is one of the major milestones of U.S. science in the 20th century. He proposed that the Earth's surface is covered by approximately one dozen quasi-rigid lithospheric plates moving with respect to one another. The development of plate tectonics has revolutionized the geophysical study of the Earth's crust and deep interior, providing a cohesive framework for investigating and understanding the occurrence of earthquakes, volcanoes, petroleum deposits and other natural resources, the character and formation of mountains, ocean basins, mid-ocean ridges and deep-sea trenches, and the evolution of both the Earth's climate and life.

Morgan went on to pioneer investigations of the dynamic circulation of the deep interior of the Earth caused by thermally driven solid-but-ductile columns of rising mantle material (plumes). Morgan was the first to propose that linear island and seamount chains in the ocean, such as the one between Hawaii and Midway, were formed by the passage of an oceanic plate over such a hot, ascending mantle plume that was quasi-stationary. Those sites are now known as volcanic "hotspots."

He is a top adviser to the nation's leadership in space policy, environmental issues, design and safety of nuclear weapons and arms control.

Fifty years ago, Garwin added a simple semiconductor diode to a conventional vacuum-tube coincidence circuit. The 100-fold increase in speed achieved by the process became a standard within nuclear and particle physics instrumentation throughout the world for the next 20 years.

Garwin invented and patented magnetic resonance techniques now used in medical magnetic resonance imaging (MRI). In the 1960s and 1970s, his inventions laid the basis for much of the technology of superconducting electronic circuitry. Garwin holds some 43 patents associated with his career at IBM.

What: Witten is a world leader in "string theory," an attempt by physicists to describe in one unified way all the known forces of nature, as well as to understand nature at the most basic level. Witten's contributions while at the Institute for Advanced Study have set the agenda for many developments, such as progress in "dualities," which suggest that all known string theories are related.

Witten's earliest papers produced advances in quantum chromodynamics (QCD), a theory that describes the interactions among the fundamental particles (quarks and gluons) that make up all atomic nuclei. Witten also suggested searches for cosmic dark matter that are now underway.

Witten discovered many relations between "supersymmetric quantum theory" and geometry. Supersymmetry lies at the basis of theoretical fundamental particles scientists are still seeking at the Fermilab Tevatron, and soon at the Large Hadron Collider under construction at CERN.

Witten's mathematical insights relating to the physics of gauge theory to the mathematics of knots and manifolds led to a revolution in understanding the classification of higher dimensional spaces. For this work, Witten became the only theoretical physicist ever to receive the Fields Medal, the most prestigious award in pure mathematics. He is also credited with demonstrating applications of algebraic geometry and topology, core disciplines of modern mathematics, to deep problems of string theory and gauge field theories.