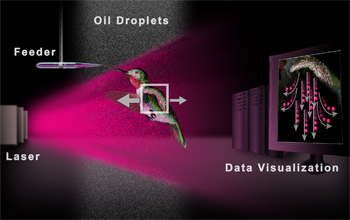 Hummingbirds are masters of the air--unique among birds for their ability to hover for long periods of time. Using a sophisticated digital imaging technique, scientists have now determined the aerodynamics of hummingbird flight. These latest data disprove conclusions from numerous earlier studies that hummingbirds hovered like insects despite their profound muscle and skeletal differences.

The team found that hummingbirds support 75 percent of their weight during the wing's down stroke and 25 percent on the up stroke--in contrast to insects, which produce equal amounts of lift during their down and up strokes.

Researchers from Oregon State University, University of Portland and George Fox University published the new findings in the June 23 issue of the journal Nature.

Co-author Bret Tobalske said, "We were surprised to find that the up stroke in the hovering hummingbird was much less active than the down stroke. This finding provides new insight into evolutionary trends that led to sustained hovering in birds."

This allocation of wing workload differs from that of other birds, which use the down stroke to support 100 percent of their weight during slow flight and short-term hovering.

Insects support 50 percent of their weight with each stroke. Tobalske pointed out that despite different ancestries hummingbirds seem to have adapted insect flight performance using a bird-like wing that flexes, twists and arches in ways that the rigid insect wing cannot.

In this study, the researchers applied "digital particle imaging velocimetry" (DPIV) to follow the flapping wings. DPIV is used in various applications to study flow characteristics of liquids and gases. By taking pictures with a special computer-coupled camera lighted with a laser, the distance traveled by individual particles seeded in a liquid or gas can be tracked through successive images. Hence, DPIV allows the researchers to follow the particles' movement image by image, like looking through the pages of a high-tech flipbook.

To observe the hummingbird in flight, the air in a wind tunnel was seeded with microscopic particles of olive oil, and digital images were captured every 300 microseconds as the bird hovered at a feeder. The wing beats caused the air to circulate, which in turn caused the floating oil particles to move. Computer-aided image analysis of each oil particle's position in consecutive frames allowed the scientists to reconstruct the lift and characteristics associated with each up and down wing movement.

It is said Igor Sikorsky, a name synonymous with the invention of the helicopter, considered the flight of hummingbirds while going through numerous design modifications. So, according to Tobalske, it is fitting that this new description of hummingbird aerodynamics will provide engineers with a refined model for developing future miniature autonomous flying vehicles.

Hummingbirds seem to garner a universal appeal, something that was largely spurred by former DuPont company president, Crawford Greenewalt, who, in the 1960s, used novel strobe-flash technology to capture the birds in color photographs--leading to popular theories about their extreme hovering ability and numerous National Geographic articles.

"You would be hard-pressed to find someone who isn't amazed by hummingbirds," said H. Ross Hawkins, founder and executive director of The Hummingbird Society. "Perhaps it's their iridescent coloration and miniature size, or their ability to drop their heart rate from 500 beats per minute during the day to 40 beats per minute at night."

Hawkins commented that it was logical, but perhaps naïve, for scientists and bird-lovers alike to postulate that hummingbirds flew like insects of similar size. "Fascinating!" he said of the findings.

See the Oregon State University news page for more information on this story.