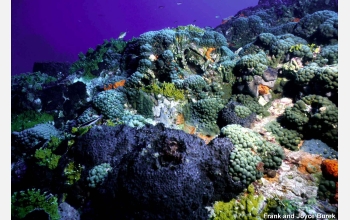 Corals like these in the Gulf of Mexico are affected by the increasing acidity of the oceans.

A report released today summarizes the known effects of increased atmospheric carbon dioxide on these organisms, known as marine calcifiers, and recommends future research for determining the extent of these impacts.

"It is clear that seawater chemistry will change in coming decades and centuries in ways that will dramatically alter marine life," says Joan Kleypas, the report's lead author and a scientist at the National Center for Atmospheric Research in Boulder, Colo.

"We're only beginning to understand the complex interactions between large-scale chemistry changes and marine ecology," says Kleypas. "It's vital to develop research strategies to better understand the long-term vulnerabilities of sensitive marine organisms to these changes."

The report, Impacts of Ocean Acidification on Coral Reefs and Other Marine Calcifers, is funded by the National Science Foundation (NSF) and the National Oceanic and Atmospheric Administration, and is the result of a workshop hosted by the U.S. Geological Survey's Integrated Science Center in St. Petersburg, Fla.

"Increasing carbon dioxide in the atmosphere has had effects in the ocean, where it's causing increased acidity," says Phil Taylor, director of NSF's biological oceanography program, which funded the report. "This increasing acidity has the potential to disrupt the calcifying processes that lead to coral reef development, for example, as well as disrupt those same processes in the microscopic plankton that form the center of the ocean's food web."

Oceans are naturally alkaline and are expected to remain so, but the interaction with carbon dioxide is making them more acidic. The increased acidity lowers the amount of carbonate in seawater, a building block of the calcium carbonate that many marine organisms use to grow their skeletons and create coral reefs. That means these organisms will grow more slowly, or their skeletons will become less dense, similar to osteoporosis in humans. As a result, reefs are threatened because corals may be unable to build them as fast as erosion wears them away.

"This threat is hitting coral reefs at the same time that they are being hit by warming-induced mass bleaching events," says Chris Langdon at the University of Miami, one of the report's authors. The mass bleaching occurs when unusually warm temperatures cause the coral to expel the colorful microscopic algae that provide the coral polyps with food.

"This is leading to the most dramatic changes in marine chemistry in at least the past 650,000 years," says Richard Feely, one of the authors and an oceanographer at NOAA's Pacific Marine Environmental Laboratory (PMEL) in Seattle.

"Decreased calcification in marine algae and animals is likely to impact marine food webs may substantially alter the biodiversity and productivity of the ocean," says Victoria Fabry of California State University at San Marcos, one of the report's authors.

Several other major ecosystems supported by organisms that secrete calcium carbonate shells may be particularly threatened by ocean acidification. These include cold-water reefs, which are extensive structures that provide habitat for many important fish species, particularly in the coastal waters of Alaska.

The report outlines future research to understand this unusual consequence of climate change. While scientists cannot yet fully predict how much marine calcification rates will change in the future, the report warns that the more critical question to answer is: "What does this mean for organism fitness and the future of marine ecosystems?"