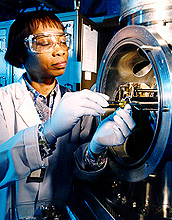 A growing number of women and foreign nationals pursued U.S. doctorates in the 20th century.

A new report released by the National Science Foundation (NSF) documents trends and patterns that reveal the rapid growth and changing demographics of doctoral education during the 20th century, especially over the last 25 years.

U.S. Doctorates in the 20th Century reveals many factors about who is educated and where. It also describes the complex changes taking place in the pursuit of doctoral degrees, many in new interdisciplinary fields. For example, relatively small Oberlin College in Ohio provided the baccalaureate origins of more science and engineering doctorates over an 80-year period (nearly 2,800) than the University of Nebraska, Duke University, Johns Hopkins University, Virginia Tech and the University of Iowa. Another example is that five of the eight leading doctorate-granting universities from 1920-1999 were Midwest-based, Big Ten schools. Prior to that period, the majority of doctorate-granting institutions were East Coast institutions.

"The report shows how much has changed in doctoral education in just 25 years," says Susan T. Hill, director of the Doctorate Data Project in NSF's Division of Science Resources Statistics. "For one thing, nearly two-thirds of all doctorates awarded in this country occurred in the last 25 years of the 20th century. Second, the United States has become an educator of the world, expanding its role in providing doctorates to foreign-born and U.S. students. Third, the U.S. system reveals a great flexibility in opening varied pathways for Ph.D. recipients into career opportunities both in and outside their fields. This has increased U.S. innovation, competitiveness and leadership in many fields."

The report is based on the Survey of Earned Doctorates, which had a 95 percent response rate. Some of the report's major findings include:

"The report is an essential reference for understanding how the nation's educational system evolved. It's an indispensable starting point for those who plan the next steps we take in this remarkable enterprise," Hill says. "The increasing reliance on loans to support doctoral study is a trend we should follow as students from lower income groups make decisions on whether or not to seek advanced degrees."

U.S. Doctorates in the 20th Century was produced under an NSF contract with SRI International and authored by Lori Thurgood, Mary J. Golladay (NSF), and Susan T. Hill (NSF). NSF provided funding for the report, along with the National Institutes of Health, National Endowment for the Humanities, NASA, the Department of Education and the Department of Agriculture.