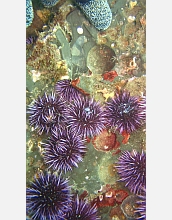 A group of adult purple sea urchins spawns in a kelp bed off the California coast.

The Sea Urchin Genome Sequencing Project (SUGSP) Consortium, led by the Human Genome Sequencing Center at Baylor College of Medicine (BCM-HGSC) in Houston, announced today the decoding and analysis of the genome sequence of the sea urchin, Strongylocentrotus purpuratus.

The genome of a male California purple sea urchin was sequenced, which contained more than 814 million DNA "letters," spelling out 23,300 genes. Nearly 10,000 of the genes were scrutinized by an international consortium of 240 scientists from more than 70 institutions in 11 countries. The sequence covers more than 90 percent of the genome.

The BCM-HGSC generated the sequence data for the SUGSP, then assembled the genome and led the analysis consortium. Additional resources for the project included a BAC library (clones with very large pieces of DNA) prepared at the California Institute of Technology and a physical map prepared at the Michael Smith Genome Sciences Centre at the British Columbia Cancer Agency in Vancouver.

The project was led by Erica Sodergren and George Weinstock, a team at the BCM-HGSC, along with Richard Gibbs, director of the BCM-HGSC, and Eric Davidson and Andrew Cameron of the California Institute of Technology. The National Human Genome Research Institute of the National Institutes of Health provided funding for the SUGSP, with the National Science Foundation (NSF) also a supporter.

Sea urchins are echinoderms (Greek for spiny skin), marine animals that originated over 540 million years ago and include starfish, brittle stars, sea lilies, and sea cucumbers. Following the great extinction of animals 250 million years ago, the modern sea urchins emerged as dominant echinoderm species. The purple sea urchin emerged in the North Pacific Ocean during a rapid burst of speciation and diversification 15-20 million years ago.

There was great interest in the sea urchin as a target for genome sequencing because these animals share a common ancestor with humans, scientists said. That ancestor lived over 540 million years ago and gave rise to the Deuterostomes, the super phylum of animals that includes phyla such as echinoderms and chordates, the phylum to which humans and other vertebrates belong.

All Deuterostomes are more closely related to each other than they are to any other animals not included in the Deuterostome super phylum. For example, among sequenced genomes, the genomes of fruit flies and worms are more distant from the sea urchin genome than is the human genome.

"This analysis shows that sea urchins share substantially more genes and biological pathways with humans than previously suspected," said Francis Collins, director of the National Human Genome Research Institute at the National Institutes of Health, which supported the research. "Comparing the genome of the sea urchin with that of the human and other model organisms will provide scientists with novel insights into the structure and function of our own genome."

To discover how sea urchins and humans can be so different, yet be related by descent from an ancient relative, their genomes were compared. The sea urchin is an invertebrate and the first example of a Deuterostome genome outside the chordates.

The sea urchin fills a large evolutionary gap in sequenced genomes," said Weinstock. "It allows us to see what went on in evolution after the split between the ancestors that gave rise to humans and insects. The sea urchin genome provided plenty of unexpected rewards and was a great choice for sequencing."

This information, scientists say, will make it possible one day to know the history of every human gene - and build a picture of what the extinct ancestors that gave rise to animal life from worms to humans looked like.

"More than 30 years ago Roy Britten and Eric Davidson offered a comprehensive theory of gene regulation in higher organisms and the sea urchin has been the premier model for testing these predictions" said Richard Gibbs, Director of the BCM-HGSC. "The complete sequence is now available to further these studies."

Because of its evolutionary position, the sea urchin genome sequence was unknown biological territory, said scientists affiliated with the SUGSP.

Some of their discoveries are:

"The sea urchin reminds us of the underlying unity of all life on earth," she said. "It is a similar set of genes and proteins being reused in different ways, different numbers, and at different times in the life cycle to create the diversity of living forms."

Many of the sea urchin biologists who participated in the Sea Urchin Genome Project are supported by NSF.