Impacts of climate change seen in both upper and lower atmospheres 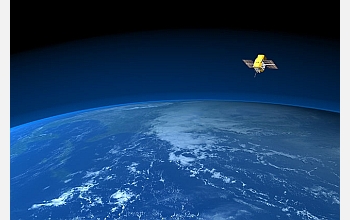 The outermost layer of the atmosphere will lose 3 percent of its density over the coming decade.

Carbon dioxide emissions from the burning of fossil fuels will produce a 3 percent reduction in the density of Earth's outermost atmosphere by 2017, according to a team of scientists from the National Center for Atmospheric Research (NCAR) and Pennsylvania State University (PSU).

The research appears in the latest issue of the journal Geophysical Research Letters, and will be presented today at the American Geophysical Union conference in San Francisco, Calif.

"We're seeing climate change manifest itself in the upper as well as lower atmosphere," said NCAR scientist Stan Solomon, a co-author of the study. "This shows the far-ranging impacts of greenhouse gas emissions."

Lower density inthe thermosphere, which is the highest layer of the atmosphere, would reduce the drag on satellites in low Earth orbit, allowing them to stay airborne longer. Forecasts of upper-level air density could help NASA and other agencies plan the fuel needs and timing of satellite launches more precisely, potentially saving millions of dollars.

Recent observations by scientists tracking satellite orbits have shown that the thermosphere, which begins about 60 miles above Earth and extends up to 400 miles, is beginning to become less dense, said Robert Kerr, program director in the National Science Foundation's (NSF) Division of Atmospheric Sciences.

This confirms a prediction made in 1989 by Roble and Bob Dickinson at NCAR that the thermosphere will cool and contract because of increasing carbon dioxide levels. The new study is the first to analyze whether the observed change will become more pronounced over the next decade.

At heights of more than 60 miles, one of the main elements of the atmosphere is atomic oxygen, a single atom of oxygen. As carbon dioxide increases near Earth's surface, it gradually diffuses upward and absorbs heat through collisions with atomic oxygen. It then radiates the heat away to space through infrared radiation, and the result is a net cooling of the upper atmosphere. As the molecules cool and settle, the thermosphere loses density.

In order to analyze recent solar cycles and peer into the future, the NCAR-PSU team used a computer model of the upper atmosphere that incorporates the solar cycle as well as the gradual increase of carbon dioxide due to human activities. The team also used a prediction for the next solar cycle, issued by NCAR scientist Mausumi Dikpati and colleagues, that calls for a stronger-than-usual solar cycle over the next decade. The model showed a decrease in thermospheric density from 1970 to 2000 of 1.7 percent per decade, or about 5 percent overall, which agrees with observations. The team found that the decrease was about three to four times more rapid during solar minimum than solar maximum.

Many satellites, including the International Space Station and the Hubble Space Telescope, follow a low Earth orbit at altitudes close to 300 miles. Over time, the upper atmosphere drags the satellites closer to Earth. The amount of drag depends on the density of the thermosphere, which is why satellite planners need better predictions of how the thermosphere changes.

"Satellite operators noticed the solar cycle changes in density at the very beginning of the space age," says Solomon. "We are now able to reproduce the changes using the NCAR models and extend them into the next solar cycle."

The research team includes Solomon, Liying Qian, and Ray Roble of NCAR's High Altitude Observatory, and Tim Kane of PSU. The study was supported by NASA's Living With a Star program and by the National Science Foundation, NCAR's primary sponsor.