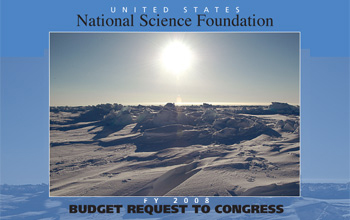 Today, National Science Foundation (NSF) Director Arden L. Bement, Jr., proposed an investment of $6.43 billion in fiscal year (FY) 2008 for agency programs to advance frontiers of research and education in science and engineering. The request includes an increase of nearly $409 million over the FY 2007 request of $6.02 billion.

Bement said the agency will use the funds to build on recent advances and to support promising initiatives to strengthen the nation's capacity for discovery and innovation.

"NSF works at the frontier of knowledge where high-risk, high-reward research can lay the foundation for revolutionary technologies and tackle difficult problems that challenge society," Bement said. "The opportunities to advance the frontiers of discovery and learning have never been more promising."

Bement said the FY 2008 figures were based on the FY 2007 budget, although those funds have not yet been fully appropriated.

Last year, the president's American Competitiveness Initiative (ACI) committed to doubling over the next 10 years investments in NSF programs and those of other federal agencies that fund physical sciences and engineering. That promise recognizes the vital role those disciplines play as major drivers of U.S. economic well being, innovation, education and international leadership. NSF's request of an 6.8 percent increase reflects that commitment.

While the ACI specifically supports advances in mathematics, physical sciences and computing, the multidisciplinary nature of modern research, infrastructure support and human resources make it difficult to draw distinct lines between areas of investigation and support. Indeed, all NSF research and education programs make vital contributions to American competitiveness and well being.

A worldwide effort is underway to plan scientific and education activities for the International Polar Year (IPY) which begins in March 2007. NSF's request for IPY support in FY 2008 is nearly $59 million. IPY promises to advance knowledge of how the Earth's remote polar regions impact global climate systems, bring about fundamental advances in many areas of science, and encourage enthusiasm among future scientists and engineers.

Much of the IPY research will support the goals of the U.S. Climate Change Science Program. Work will include observations, data analysis, models, and basic and social science research to strengthen our understanding and response to global environmental challenges. Another major focus will be research that explores how life adapts to and survives in polar environments, with emphasis on the cellular and genomic levels but expanding to human impacts as well. A third focus will be maintaining existing standardized data sets, creating new scientific collections, and ensuring their availability to current and future generations.

The rapidly emerging world of petascale computers--operating at 1 quadrillion calculations per second--massive data flows, and enormous databases pose exceptional challenges that require capabilities well beyond those available today. The FY 2008 request includes $52 million for an important new NSF-wide investment to broaden the nation's capability for innovation by developing a new generation of computationally based concepts and tools to analyze complex, data-rich, and interacting systems derived from discoveries on every front. Cyber-enabled Discovery and Innovation (CDI) aims to explore radically new concepts, approaches, and tools at the intersection of computational and physical or biological worlds to address such challenges.

The CDI initiative complements activities of the interagency Networking and Information Technology R&D (NITRD) initiative. For FY 2008, NSF research areas within NITRD will receive an additional funding of $90 million to total nearly $1 billion for the agency. Specific increases will cover high-end computing infrastructure and applications, large-scale networking, and the social, economic and workforce aspects of information technology.

NSF is increasing its investment in the interagency National Nanotechnology Initiative by nearly $17 million in FY 2008 for a total of $390 million. Increased funding is requested for fundamental nanoscale research, development of nanomaterials, and for research directed at environmental, health, and safety impacts of nanotechnology development. This includes $25.8 million for a multidisciplinary focus on interactions between particles, nanoscale materials and the living world.

Understanding the interactions between society and the ocean is vital to ensuring a clean, healthy, and stable ocean environment. The Ocean Research Priorities Plan, released in January, identifies significant research challenges needed to understand ocean dynamics, forecast ocean events, and manage ocean resources. NSF's new investment of $17 million in FY 2008 will support the complex dynamics that control and regulate marine ecosystem processes; the variability of the Atlantic Meridional Overturning Circulation; the response of coastal ecosystems to extreme and abrupt events; and the development of new sensors to improve ocean observations.

EPSCoR invests in strategic programs and opportunities for institutions in jurisdictions and states that historically have not been equal partners in the federal R&D enterprise. The NSF program aims to make sustainable improvements in research capacity of those institutions and contributes substantially to the nation's overall ability to compete globally. NSF will increase EPSCoR support by 7 percent to $107 million in FY 2008.

International partnerships allow U.S. students, scientists and engineers to stay knowledgeable about new concepts and technologies emerging around the world, and provide the experience needed to operate effectively in teams of partners from different nations and cultural backgrounds. Through the Office of International Science and Engineering, NSF will continue to support participation of U.S. scientists and engineers in international programs with an increase of nearly 11 percent in FY 2008 to a total of $45 million.

Traditional approaches to science, technology, engineering, and mathematics education does not take full advantage of communications technologies, new concepts and tools, and convergence among disciplines. Yet, recent analysis of NSF's Math and Science Partnership program showed that participating elementary, middle- and high-school students improved in mathematics and science proficiency over the 3-year survey period. Projects in the current MSP portfolio are expected to impact more than 141,000 science and mathematics teachers and 4.2 million students in 550 local school districts.

With an additional $9 million, NSF will fund an additional 200 graduate students through its flagship Graduate Research Fellowships Program. This long-standing program provides support to the most promising individuals who are pursuing graduate education in the wide range of disciplines supported by NSF. Since 1952, over 41,000 U.S. students have received the fellowships. In FY 2008 approximately 2,950 fellows will be supported.

NSF will continue its commitment in FY 2008 to steward excellence in science and engineering research and education by maintaining a capable and responsive organization. Improving the transparency, consistency, and uniformity of the merit review process is a priority for 2008 and into the future.