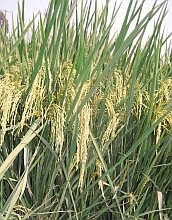 Plant biologists have reported a new understanding of how genes work in rice.

Scientists have reported development of a large dataset of gene sequences in rice. The information will lead to an increased understanding of how genes work in rice, an essential food for much of the world's population.

Plant biologist Blake Meyers at the University of Delaware and colleagues report their results in the March 11 on-line issue of the journal Nature Biotechnology.

The analysis of rice was based on gene sequences representing nearly 47 million mRNA molecules and three million small RNAs, a larger dataset than has been reported for any other plant species.

Small RNAs are considered one of most important discoveries in biotechnology in the last 10 years. Because they are so much smaller than mRNAs, small RNAs went unnoticed for many years, or were considered biologically unimportant, said Meyers.

Small RNAs are now known to play an important role in gene regulation, he said, adding that deficiencies in small RNA production can have a profound effect on development.

"Small RNAs also have been associated with other important biological processes, such as responses to stress," Meyers said. "Many of small RNAs in rice have related sequences in the many important cereal crop plants, including maize and wheat."

Research on small RNAs "is a leading edge in plant biotechnology," said Machi Dilworth, Director of the National Science Foundation (NSF)'s Division of Biological Infrastructure, which along with the U.S. Department of Agriculture, funded the research. "This work will contribute to an understanding of the role of small RNAs in gene expression not only in rice, but in all plants."