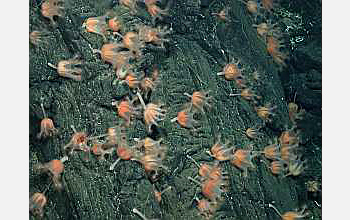 A recently-discovered jellyfish has been found at newly discovered vents in the Pacific Ocean.

Scientists from Duke University, the Universities of New Hampshire and South Carolina, and the Woods Hole Oceanographic Institution in Massachusetts have named their discovery the Medusa Hydrothermal Vent Field.

The researchers chose that name to highlight the presence there of a unique pink form of the jellyfish order stauromedusae. The jellyfish resemble "the serpent-haired Medusa of Greek myth," said expedition leader Emily Klein, a geologist at Duke University.

The bell-shaped jellyfish sighted near the vents may be of a new species "because no one has seen this color before," said Karen Von Damm, a geologist at the University of New Hampshire.

According to Von Damm, stauromedusae are usually found away from high-temperature hydrothermal vents, where the fluids are a little bit cooler, not close to the vents as these are.

Aboard the Research Vessel (R/V) Atlantis, the researchers are studying ocean floor geology of the East Pacific Rise, one of the mid-ocean ridge systems where new crust is made as the earth spreads apart to release molten lava.

"Each new vent site has the potential to reveal new discoveries in interactions between hot rocks beneath the seafloor, the fluids that interact with those rocks and the oceans above, as well as a rich biosphere that depends on vent processes," said Adam Schultz, program director in NSF's Division of Ocean Sciences, which funded the expedition through its Ridge 2000 program. "This discovery has implications for understanding the origin of Earth's crust, its evolution over time and how living organisms adapt to extreme environmental conditions."

Jason II, a remotely-controlled robotic vehicle the scientists are using to probe the vent field, logged water temperatures of 330 degrees Celsius (626 degrees Fahrenheit) at the mouth of one of the vents. Jason II subsequently found a second vent about 100 yards away.

Von Damm said that heat-tolerant tubeworms found living on Medusa's chimneys, a type known as alvinellids, are commonplace in the equatorial Pacific and thrive on high-iron fluids. Jason also has retrieved two other types of tubeworms--tevnia and riftia--from the vent area.

In addition, the camera-studded robot, which can collect biological specimens with the aid of the mechanical arms it uses to remove rock samples, has gathered samples of mussels from the vent area.

According to Von Damm, wherever there are mid-ocean ridges, scientists frequently find geothermal vents warmed by heat energy from underlying volcanic conduits.

"Each new vent sparks fresh excitement, because each one is different. Every vent has a different chemistry, and that helps us understand the processes going on in the ocean crust. Each one gives us a different piece of the puzzle," Von Damm said.

More than 500 new species have been found at vents since they were first discovered in 1977.

"After looking at relatively barren lava flows for several days on this expedition," said geologist Scott White of the University of South Carolina, "we all knew it would be special when we found creatures living at this new vent field."