The Emergence of Life on Earth...and Other Planets?

Scientist Robert Hazen to present lecture on origin of life at 3 p.m., June 18, at NSF in Arlington, Va. 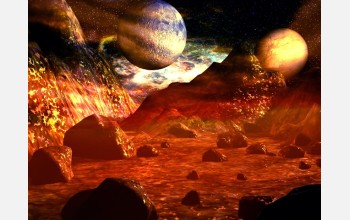 Astrobiologist Robert Hazen will present a lecture at NSF on the origin of life.

On Monday, June 18, 2007, astrobiologist Robert Hazen of the Carnegie Institution and George Mason University, will provide insights into the emergence of life on our planet--and perhaps others--during a Directorate for Biological Sciences Distinguished Lecture at the National Science Foundation (NSF) in Arlington, Va.

Life on Earth arose nearly 4 billion years ago. Though the process obeyed all the rules of chemistry and physics, the details of that original event pose as deep a mystery as any facing scientists, believes Hazen.

By what process did life actually begin? How did non-living chemistry become "alive"? Where, when, and how did life emerge on the primitive Earth? Is life's origin an "imperative" throughout the cosmos, or is life an improbable accident, restricted to a few planets (or only one)?

Background:
Through experiments that subject elements found near deep-ocean vents to high temperatures and crushing pressures, Hazen hypothesizes that life may well have begun in such a place, nourished by a rich mixture of minerals and organic compounds, and energized by Earth's tectonic forces.

But what about on other planets?

Without direct observations of worlds beyond our own, scientists seek ways of deducing whether life exists there.

The origin of life on our world and possibly on others, says Hazen, can be modeled as a sequence of events that transformed the lifeless geochemistry of oceans, atmosphere and earth into a living planet.

It all comes down to emergence, he says. Emergence in common usage, he writes in his book Genesis: The Scientific Quest for Life's Origin, refers to a shadowy figure from the darkness, a submarine from the sea, or a plot in a novel.

But emergence has developed a different meaning in scientific terminology. Researchers use emergence to describe processes by which complex systems arise from simpler ones.

The process begins with the synthesis of biomolecules in a variety of pre-biotic environments.

A key step on Earth in the ancient transition from geochemistry to biochemistry was the emergence of the first self-replicating molecules and the triggering of rapid evolution through competition and natural selection.

This concept of a sequence of steps is important in studies of the origin of life because it reduces a complex process to a series of more manageable chemical episodes, believes Hazen. Each step becomes a process for laboratory experimentation or theoretical modeling of how life began on Earth.

And perhaps on distant planets.