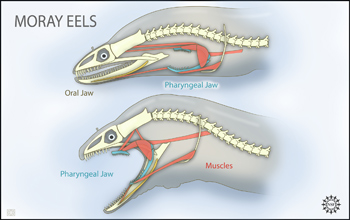 Moray eels have two sets of jaws--the oral jaws and the pharyngeal jaws.

How do long, slender snake-like creatures manage to stuff large, struggling prey into their narrow mouths and down their throats without using paws or claws? A new study reveals that the slender, snake-like moray eel--which may reach up to about nine feet in length--captures and consumes its prey (usually large fish, octopuses and squid) with a unique strategy that involves using two sets of jaws.

According to the study, the moray eel starts feeding by seizing its prey in the jaws of its oral cavity. This set of jaws is armed with sharp, piercing teeth that curve backwards, pointing towards the eel's throat. So structured, these teeth are specially designed to help prevent prey from backing out of the eel's mouth, much like spike-strips in parking lots help prevent cars from backing out of entrance ramps.

Once prey is secured in the eel's oral jaws, a second set of toothy jaws (known as the pharyngeal jaws) located behind the eel's skull lunges forward, advancing along almost the full length of its skull, to snatch and deliver the prey to the eel's esophagus for swallowing.

An article describing the moray eel feeding study, which was partially funded by the National Science Foundation (NSF), appears in the September 6 edition of Nature. The article identifies the moray eel as the only known vertebrate to use a second set of jaws to both restrain and transport prey. Rita Mehta, a researcher at the University of California at Davis and the article's lead author, describes the eel's feeding method as "an amazing innovation for the feeding behavior of fishes."

About 30,000 fish species besides the moray eel have a second set of jaws in their throat region. But as far as we know, such jaws have only limited mobility and so only grind or crush prey; they cannot provide the essential functions provided by the moray eel's jaws.

Unlike the moray eel, most fish capture and move prey into their throats by using suction. For example, some fish rapidly expand their mouths and thereby draw in water and associated food. Others overtake prey with their open mouths or grab prey in their jaws, but then create suction to move the prey from their mouths to their esophagus. But moray eels have little ability to generate suction through their mouths, Mehta found.

More than 200 species of moray eels dwell in tropical waters worldwide. Reclusive and secretive, moray eels are most frequently observed in coral reefs, with their heads poking out of holes in rocks or coral structures. Serving as top predators in coral reefs, they may have evolved their unique feeding method to enable them to hunt large prey in confined spaces, where they cannot expand their heads to create suction.

Mehta points out that, like moray eels, snakes must also fit large food items through a relatively narrow mouth into a long, thin body. But snakes solved the problem by separating the left and right sides of their jaw while eating; they hold onto the food with one side while they work the other side of the mouth round it. Snakes thereby "jaw walk over their prey," says Mehta.

Mehta said that she is now investigating how the moray eel evolved its extraordinary jaws and working to identify the maximum size of the moray eel's prey. "Eels are an amazingly diverse and bizarre group of fishes, and not very well known," said Peter C. Wainwright of the University of California, Davis, who is a co-investigator of the study.

In addition to receiving NSF support, the new eel study also received support from the American Association of University Women.