In new table-top reactor, bacteria from wastewater produce abundant, clean hydrogen from cellulose, or even vinegar, and a little electricity 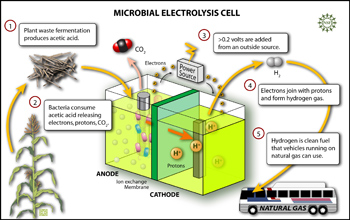 By adding a few modifications to their successful wastewater fuel cell, researchers have coaxed common bacteria to produce hydrogen in a new, efficient way.

Bruce Logan and colleagues at Penn State University had already shown success at using microbes to produce electricity. Now, using starter material that could theoretically be sourced from a salad bar, the researchers have coaxed those same microbes to generate hydrogen.

By tweaking their design, improving conditions for the bacteria, and adding a small jolt of electricity, they increased the hydrogen yield to a new record for this type of system.

"We achieved the highest hydrogen yields ever obtained with this approach from different sources of organic matter, such as yields of 91 percent using vinegar (acetic acid) and 68 percent using cellulose," said Logan.

In certain configurations, nearly all of the hydrogen contained in the molecules of source material converted to useable hydrogen gas, an efficiency that could eventually open the door to bacterial hydrogen production on a larger scale.

Logan and lead author Shaoan Cheng announced their results in the Nov. 12, 2007, online version of Proceedings of the National Academy of Sciences.

"Bruce Logan is a clear leader in this area of research on sustainable energy," said Bruce Hamilton, NSF director of the environmental sustainability program at NSF and the officer overseeing Logan's research grant. "Advances in sustainable energy capabilities are of paramount importance to our nation's security and economic well-being. We have been supporting his cutting-edge research on microbial fuel cells for a number of years and it is wonderful to see the outstanding results that he continues to produce."

Other systems produce hydrogen on a larger scale, but few if any match the new system for energy efficiency.

Even with the small amount of electricity applied, the hydrogen ultimately provides more energy as a fuel than the electricity needed to drive the reactor. Incorporating all energy inputs and outputs, the overall efficiency of the vinegar-fueled system is better than 80 percent, far better than the efficiency for generation of the leading alternative fuel, ethanol.

Even most electrolysis techniques, methods to extract hydrogen from water using electricity, pale in comparison to the new method.

"We can do that by using the bacteria to efficiently extract energy from the organic matter," said Logan. By perfecting the environment for the bacteria to do what they already do in nature, the new approach can be three to ten times more efficient than standard electrolysis.

Additional information about the new technology and how it works can be found in the Penn State press release at http://www.psu.edu/ur/2007/biohydrogen.htm.

The work of Logan and his colleagues has been featured in two prior NSF press releases:

Waste Not, Want Not

The current project was supported through NSF award #0401885.