Elevated structure is the third U.S. station at the Pole since 1956, and an engineering marvel 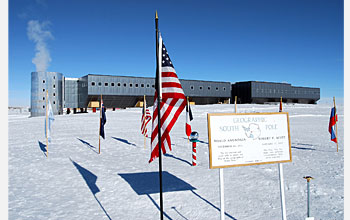 The United States has dedicated a new scientific station at the geographic South Pole--the third since 1957--officially ushering in a new support system for sophisticated large-scale experiments in disciplines ranging from astrophysics to environmental chemistry and seismology.

The dedication of the new Amundsen-Scott South Pole Station, which took place on Sat., Jan. 12, local time (U.S. stations in Antarctica keep New Zealand time), also reasserts the National Science Foundation's (NSF) vital role in managing the U.S. Antarctic Program in order to meet the needs of the U.S. research community as well as those of other federal agencies. NSF manages the U.S. Antarctic Program.

Arden L. Bement Jr., NSF director, spoke to an assembled group of dignitaries as the American flag was raised over the new elevated station. Just hours before, the stars and stripes had been struck for the last time over the iconic domed station adjacent to the new building, which had served as the U.S. scientific outpost at the South Pole since the mid-1970's. In attendance were heads of federal agencies with a scientific presence at the Pole and others who played key roles in the design and completion of the project.

"Our purpose is to dedicate a facility that will help us push back the boundaries of the unknown--a quest that has continued year-round at this site for over 50 years," Bement said. "And to pay our respects to those who helped transform this mysterious and forbidding continent into a globally recognized place of wonder, transformation and knowledge."

Bement also remarked on the contributions to polar exploration of New Zealander Sir Edmund Hillary, who died at the age of 88 just hours before the ceremony. "It is fitting that we pause for a moment to remember the accomplishments of Sir Edmund Hillary, who stood near this very spot in January 1958, the first person to do so since Robert Falcon Scott in 1912," he said. "I was honored to meet him at the 50th anniversary of the building of New Zealand's Scott Base in 2007, an accomplishment for which he was responsible. I cannot help but believe that he is here with us in spirit today as we usher in this new phase of scientific exploration of the continent which he so loved."

Bement was joined at the ceremony by two former NSF directors: Neal Lane, senior fellow in science and technology policy at Rice University's James A. Baker III Institute for Public Policy, and Rita Colwell, chairman of Canon U.S. Life Sciences, Inc. and distinguished professor both at the University of Maryland at College Park and at Johns Hopkins University's Bloomberg School of Public Health.

NSF is responsible for the operation of the new station as well as the reconstruction and associated environmental upgrades.

Also in attendance at the ceremony were:

Erb noted that the dedication occurred slightly more than 50 years after men spent the first winter at the Pole in 1957, during the International Geophysical Year (IGY). That first group was an 18-member team of U.S Navy personnel and civilian scientists.

The dedication, Erb added, coming as it does at the height of the International Polar Year (IPY), a concerted scientific field campaign supported by more than 60 nations worldwide which shares many of the IGY goals, has a particular resonance.

Erb also noted that the new station not only is dramatically more technologically and architecturally sophisticated than the 1975 station or its predecessor, but is also almost immeasurably different from the first habitation ever erected at the Pole: a pyramidal tent left as proof of his accomplishment by the first man to reach the site, Norwegian Roald Amundsen, and for Briton Scott, whose party reached the Pole a month later.

The station is named for the two explorers.

The replacement of the South Pole station was given critical support by the external panel chaired by Augustine, who, in a key 1997 report, argued that the existing facilities at the South Pole were both outmoded and potentially unsafe. The report noted that "Antarctica today is a continent generally characterized by peaceful, environmentally friendly, human activity. High among the reasons for this situation is the role played by the U.S. over many years in helping create a system of treaties and international agreements governing the nature of human conduct on the continent. The presence of the U.S. in Antarctica is a key element of the continued stability of the region."

To maintain that stability the panel recommended that the "U.S., as a matter of national policy, should maintain a continued year-round presence in Antarctica, including at the South Pole."

But the panel also found that, at the time, "various critical safety and health deficiencies exist at U.S. facilities in Antarctica, particularly at South Pole Station," and recommended environmental upgrades and reconstruction.

The elevated station is the most imposing structure ever built at the Pole and the 12-year reconstruction required extraordinary effort to complete. It required 925 flights by ski-equipped LC-130 aircraft flown by the N.Y. Air National Guard. At 26,000 pounds of cargo per flight, a total of 24 million pounds of cargo were transported.

In November of 2007, Popular Science magazine named the new station as one of its "Best of What's New" innovations of the year.